Jake LaMotta – The ‘Bronx Bull’ of the Boxing Ring 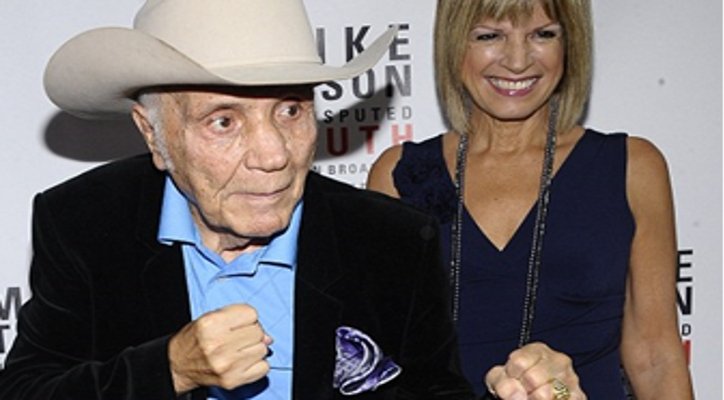 At the age of 93, Jake LaMotta is the oldest former world boxing champion alive today.

Born in the Bronx, New York City, in 1921, he boxed at both middleweight and light heavyweight and had 106 senior fights, winning 83 (30 by a knock out), losing 19 and drawing four.

Jake was forced by his father into fighting other children to entertain neighborhood adults, who threw change into the ring. This was used to help pay the rent.

In 1941, aged 19, Jake turned professional but during WWII he was rejected for military service because of an operation on one of his ears, he carried on boxing and went from strength to strength.

He won 14 of his first 15 bouts as a middleweight before losing a highly contentious split decision to Cleveland-based Jimmy Reeves, chaos erupted after the decision was announced.

Later Jake met Reeves again and this time Reeves won, before a third match between the two took place in March 1943 in Detroit, Michigan. After an even contest, Jake struck with a vicious left hook, sending Reeves crashing to the canvas.

Now one of the best at this level, Jake’s next fight was against the former welterweight champion Sugar Ray Robinson – Robinson’s first bout at middleweight.  Spectators at Madison Square Garden, saw Jake knock Robinson down in the first round but he took control of the fight, winning comfortably on points.

The re-match took place a few months later in Detroit when those present witnessed an historic eighth round. Jake landed a right to Robinson’s head and a left to his body, sending him straight through the ropes. The bell saved Robinson at the count of nine. Jake was already well in front with the judges. Robinson never recovered and suffered the first defeat of his career, beaten on points.

A fourth fight, staged nearly two years later, resulted in another win for Robinson who also won the fifth in Chicago in September 1945, on a split decision which was booed by the 14,755 audience.

Jake returned to boxing in November 1947, but was knocked out in the fourth round by Billy Fox. Suspecting the fight was fixed, the New York State Athletic Commission withheld purses for the fight and suspended Jake and this fight with Fox would come back to haunt him later in life, during a case with the Federal Bureau of Investigation (FBI).

In his testimony Jake admitted to throwing the fight in order to gain favor with the Mafia. All involved agreed the fix was obvious and their staging inept.

In Jake’s words: “The first round, a couple of belts to his head, and I see a glassy look coming over his eyes. Jesus Christ, a couple of jabs and he’s going to fall down? I began to panic a little. I was supposed to be throwing a fight to this guy, and it looked like I was going to end up holding him on his feet… By the 4th round, if there was anybody in the Garden who didn’t know what was happening, he must have been dead drunk.”

The thrown fight and a payment of $20,000 to the Mafia got Jake his title bout against the world middleweight champion from France, Marcel Cerdan.

Jake won his fight against Cedan in June 1949 in Detroit, the Frenchman retired with a damaged shoulder before the start of the 10th round. A re-match was arranged, but as he was flying back to the United States, Cedan’s plane crashed in the Azores, killing everyone on board.

In February 1951, Jake fought Sugar Ray Robinson for the final time in their legendary six-bout rivalry. In a tough contest,Jake too a terrible beating over the last few rounds but refused to go down. In the end Robinson won by a technical knockout in the 13th.

Jake moved up to the light heavyweight class after losing to Robinson, but had a run of poor results at first, including a debut defeat against Bob Murphy. Thankfully, he recovered well and won three fights in a row, beating Norman Hayes, Eugene Hairston and Murphy in re-matches.

On New Year’s Eve 1952, Jake had his fight with Danny Nardico stopped in the 8th round after being knocked down for the first time in his career, and when he returned to the ring, he knocked out his first two opponents, Johnny Pretzie and Al McCoy, but lost on a points decision split decision to Billy Kilgore which convinced him to retire.

After taking off his gloves, Jake managed and also owned a number of bars. He also became a stage actor and stand-up comedian but in 1958 was arrested and charged with introducing men to an underage girl at a club he owned in Miami. He was convicted and served time on a chain gang, although he has maintained his innocence.