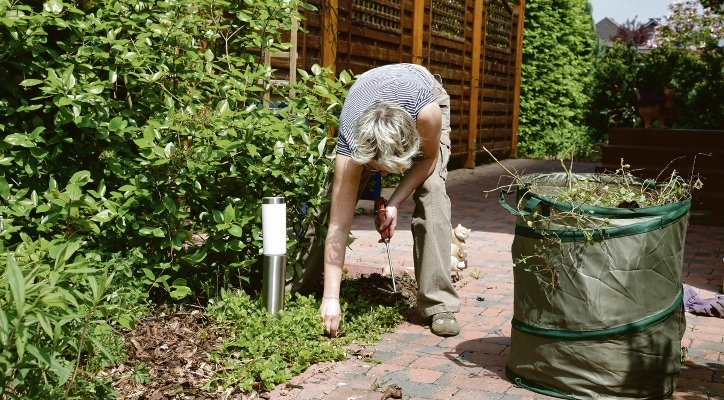 THE long 2013 drought has caused more weeds to grow in the countryside and in gardens than normal for two reasons.

More ripe dry weed seeds than normal were distributed by winds and then lay dormant until the late autumn rains.

So what could have been done to prevent the germination of unwanted seeds in the first place or deal with those that do start to grow.

Here are 15 handy ideas, each except one, avoiding the use of weed killers.

This will reduce the areas of soil in which seeds can germinate.

The same benefit as number ‘1’.

Solid plastic sheeting is more effective than woven plastic. Hide the plastic with attractive mulch such as various colours and sizes of stone chippings.

Mulch bare earth areas under and around plants to hinder the germination of unwanted seeds and at the same time reduce the evaporation of moisture from the surface of soil during hot weather.

Section 4.7 of the book ‘How to Use Less Water in Your Garden – A practical guide to waterwise Mediterranean style gardening worldwide’ lists 18 useful ways of mulching ranging from ground volcanic rock, stone chippings, compost old carpets and rock slabs.

This will reduce your garden maintenance work, attract worms, fertilise the soil naturally and reduce moisture losses as well as deterring weed growth.

6. Use a butane weeding flame gun

This garden tool is especially useful for clearing drives and old chipping areas.

Additionally if you grow vegetable plants so that they touch after a few weeks of growth you won’t get weeds anyway after the first few weeks.

9. Use sacrificial plants in early days

To achieve ‘8’ from day one, plant temporary ground cover plants between intended perma-nent plants recognising that they will eventually be smothered as the permanent plants spread and join up.

Mulched soil in front of medium sized plants or under taller plants can be usefully planted with a variety of ground cover plants. Some 25 are described in the book ‘Your Garden in Spain’ for starters.

Some plants like morning glory can become a nuisance and become a real pest, weed, unless you use it carefully to hide an unsightly wall or shed or stabilise an earth bank.

Unless you have pet dogs or cats prowling the garden wild dandelions, purslane and the white flowered wild rocket make useful additions to salads.

The wide use of chemical weed killers such as Round-Up does permanent harm to the structure of soil as it kills off beneficial microbes that help soil particles to aggregate and produce a crumbly easily worked soil and also enable roots to extract essential nutrients from the soil.

An alternative natural weed killer is a 5 per cent vinegar water solution. This can be sprayed but is more eco if applied weed by weed by painting it on with a brush.

Do this a few times a year to work weeds into the soil as a natural soil improver.

This week’s column is dedicated to the owners of the busy El Mojito English bar in La Carihuela where on Christmas Eve I ate a large breakfast to build myself up after my hospital stay. On entering I saw the previous week’s and that day’s edition of the Euro Weekly News, so I could update myself with two week’s news.

When I showed my articles to the owner Terry, he asked if I could I do a special article on weed control.

The answer was yes and if other readers have special requests for the topics of future articles send them into EWN.