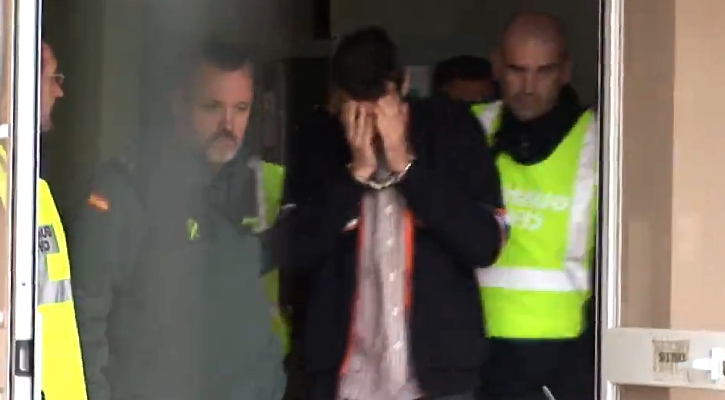 UPDATE: THE stepfather of Alejandro, the three-year-old found dead in a reservoir in Montes de Malaga, has confessed to having let him drown after a fight with the child’s mother.

Antonio Fernandez Augusto confessed at the Guardia Civil station of Rincon de la Victoria that he had, “not taken the child out of the water and let him drown because he was angry at his mother,” according to the judge at his hearing yesterday (February 12).

The 24-year-old was brought before a judge to testify after having spent 60 hours in custody. He refused to answer the prosecutor’s questions or those asked by the judge.

Mr Fernandez only answered his own lawyer, Rafael Ramos, who asked him if he remembered ever testifying at the police station, to which the suspect answered that he did.

When asked if he remembered what he told the officers he replied that he had been given a tranquilizer by the officers as he was having an anxiety attack and could not remember. The lawyer also asked him if he could swim, to which he replied he could not.

After the short testimony, the judge considered the statement made at the Guardia Civil station as enough evidence to charge him with murder and remand him to prison.

The judge also noted that the child’s body was found at around 3am, following the suspect’s indications, and that he had also given several different version of what had occurred that day.

THE post mortem examination on the body of three-year-old Alejandro, recovered from a reservoir in the Montes de Malaga area yesterday, has shown that the cause of death was drowning.

Malaga’s Legal Medicine Institute (IML) confirmed that his body did not present any signs of violence.

A vehicle belonging to Alejandro’s stepfather has been confiscated as it was reportedly used to transport the child from his nursery school to the reservoir where he was found, 15 kilometres away from Malaga City, in the Montes de Malaga.

It has been confirmed by Guardia Civil that Antonio, who has been charged with the homicide of the child, already had a criminal record for pyromania.

He has not confessed to the crime, although he claimed at some point during the investigation that he had thrown the child into the sea, which turned out to be a lie.

Authorities continue to investigate the reasons behind the death, and the suspect is expected to be brought before a judge today or, at the latest, tomorrow.

THE dead body of Alejandro, a three-year-old boy who went missing on February 9, has been found floating in a reservoir in Cala del Moral (Rincon de la Victoria).

The mother’s partner, Antonio AA, was in charge of the child at the time of his disappearance, and gave several different versions of how he had lost sight of him.

He alerted the authorities at around 5.15pm and said that he had lost him in a shopping centre in La Cala, after he had picked him up from school.

However, after 40 minutes of searching inside the store, the officers told him they would check the surveillance cameras, and he changed his story, saying that he had lost sight of the child around the area of La Cala beach.

After watching the tapes, officers confirmed the child had not been in the shopping centre that day.

The search was again unfruitful and it was extended to the Arroyo de Totalan and the Peñon del Cuervo. After that, the authorities decided to carry out a reconstruction of the events leading to the child’s disappearance.

Finally, according to the information released by the Guardia Civil, the man admitted that he had thrown Alejandro into the sea, although he later said the child had fallen into the water.

The body was taken from the water at around 4am and will undergo a post mortem examination.

Malaga Council has announced a gathering scheduled for today (Tuesday, February 10) at 12pm, in remembrance of Alejandro.