New PM for Britain: May to succeed Cameron on Wednesday 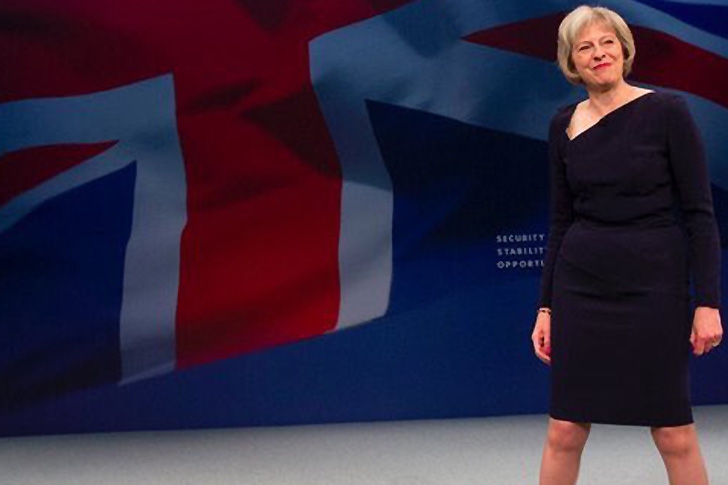 BREXIT MEANS BREXIT: Theresa May was once again unequivocal on the issue during her leadership speech.

DAVID CAMERON produced a moment of comedy gold after announcing that he will step down as Prime Minister on Wednesday, July 13, when he left his microphone on and was heard to be humming a sorrowful “doo, doo, doo, doo,” while he ambled back to Number 10, before emitting a purposeful “Right…Good,” as the door closed behind him.

The gaffe provided a rare light-hearted moment in the UK’s ongoing political shables, with Theresa May now set to be unveiled as Prime Minister after Andrea Leadsom had earlier pulled out of the Tory leadership race, with her campaign manager, Tim Loughton, claiming that she was the victim of a dirty tricks campaign spearheaded by both politicians and journalists.

In a brief statement, the hapless Cameron confirmed that he will resign after Prime Minister’s questions on Wednesday, as he said: “We are not going to have a prolonged leadership election campaign. I think Andrea Leadsom made absolutely the right decision to stand aside. It is clear Theresa May has the overwhelming support of the Conservative parliamentary party.

“I’m also delighted that Theresa May will be the next prime minister. She is strong, she is competent, she’s more than able to provide the leadership the country is going to need in the years ahead and she will have my full support.

“Obviously with these changes we now don’t need to have a prolonged period of transition. And so tomorrow I will chair my last cabinet meeting. On Wednesday I will attend the House of Commons for prime minister’s questions. And then after that I expect to go to the Palace and offer my resignation, so we will have a new prime minister in that building behind me by Wednesday evening.”

May will now enter Number 10 having only launching her formal bid for the leadership this morning, as her chief rival Leadsom threw in the towel barely an hour later, leading Labour and the Liberal Democrats to demand an early general election, with the former’s election coordinator Jon Trickett branding the Home Secretary’s step up the ladder as a “coronation.”

Her leadership pitch earlier in the day revealed a somewhat centrist chain of thought, with concepts seemingly scrumped from the horrifying New Labour triumvirate of Gordon Brown, Ed Milliband, and Tony Blair, as she pontificated about Treasury-backed project bonds for infrastructure, stakeholder capitalism, worker representation on company boards, and action on excessive executive pay-packets, in a speech which could have been plucked from Labour’s last election manifesto, although this is of course entirely preferable to the likes of Leadsom or Gorgeous Gove and his media chums.

How many of these left-leaning schemes actually comes to pass once she is installed on Downing Street remains to be seen given the Tory party’s performance throughout and subsequent to the Brexit campaign, but for now we can at least be certain that Britain is in line for its second female Prime Minister.