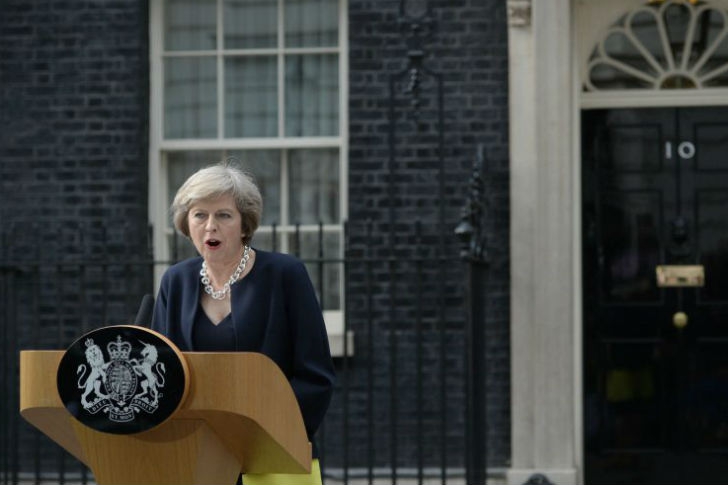 WE BELIEVE IN THE UNION: May referenced the "precious, precious bond between England, Scotland, Wales and Northern Ireland."

THERESA MAY became Prime Minister of Britain, then vowed to lead a “one nation” government that is based on justice for all and not just the “privileged few,” in what was arguably the most radical speech from a Tory PM since John Major spoke of his dream of a classless society in the early 1990s.

She also delivered what appeared to be a slap down to the Etonian brigade headed by David Cameron and Gideon Osborne, as she said: “If you’re a white working-class boy you’re less likely than anybody else in Britain to go to university.

“If you’re at a state school you’re less likely to reach the top professions than if you’re educated privately.

“If you’re young you will find it harder than ever before to own your own home. If you’re from an ordinary working-class family, life is much harder than many people in Westminster realise.”

The UK’s second female PM also wasted no time in starting to form her new government, with Phillip Hammond, the ex-Foreign Secretary who garnered a reputation as the party’s “axeman” while in the opposition treasury team, being appointed Chancellor of the Exchequer.

Gibbering Gideon was apparently sacked from his role after May told him that he has no place in her cabinet, and did not stand down himself.

Brexit campaigner Boris Johnson is the countrys new Foreign Secretary, in what may be seen as a move to keep him away from the Brexit negotiations, which will be headed by veteran Eurosceptic and ex-party chairman David Davies, who has landed the role as Secretary of State for Brexit.

The Home Secretary vacancy has been filled by former secretary for energy and climate change, Amber Rudd, who famously asserted that she would not trust new Foreign Secretary Johnson to drive her home at the end of a night out.

Defence secretary Michael Fallon has survived the cull, continuing in a position he has held since 2014, while former defence secretary Liam Fox is to lead a new Department for International Trade, which will of course be crucial to a successful Brexit.

No further appointments appear likely until Thursday, July 14, after a busy day in which David Cameron used his last prime minister’s questions to praise his fellow MPs, while poking fun at Jeremy Corbyn for being so useless that a Conservative voter once urged him to try to keep the Labour leader in his job.

Later, his utterly forgettable speech outside Number 10 ended with “Nothing is really impossible if you put your mind to it”, which is somewhat ironic given the state of uncertainty he has left the country in, and the enormity of the task now facing his successor.