THE rain did not stop falling all morning, meaning Spain’s National Day parade was something of a soggy, yet still grand affair.

There was some uncertainty as to whether the airborne parade may have to be cancelled, and in the end some helicopters, transport planes and F-5 fighters were grounded, although the C-101 Eagle Patrol, F-18 and Eurofighters managed to make an appearance. 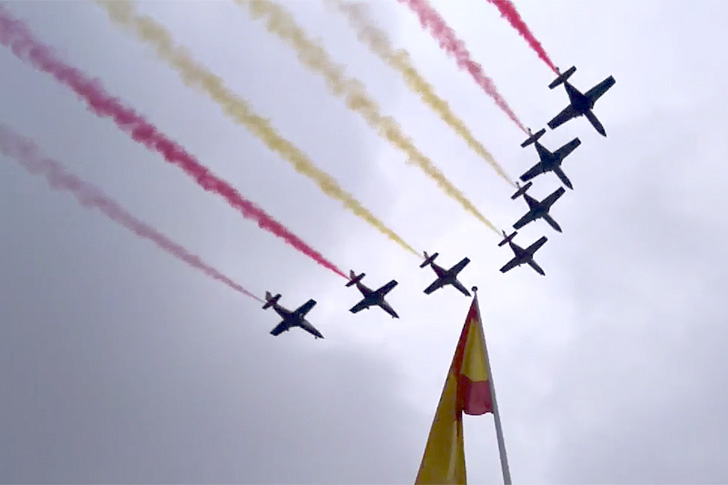 King Felipe VI donned the uniform of Army Commander in Chief, while Queen Leticia wore a tailored white coat dress with black embroidery as she helped preside over proceedings alongside her daughters Princess Leonor of Asturias and Infanta Sofia.

The entire Spanish government and representatives of the most important state institutions also watched on from the grandstand.

To the King’s right were political leaders including Albert Rivera of Cuidadanos, Antonio Hernando of the PSOE and Rafel hernando of the PP, among others, while on his left sat regional presidents such as Javier Fernandez of Asturias.

Notable absentees included the leaders of Catalonia, the Basque Country, Valencia, Navarra and Galicia, plus Podemos big cheese Pablo Iglesias, who earlier denounced the “hypocrisy” of those who believe that “to defend the homeland is to attend a fancy parade.”

Acting defence minister, Pedro Morenes, took the bait as he retorted: “We do not force anyone to come.”

Andalucian president Susana Diaz was also in attendance, and she added: “There are some who believe that they don’t need to be here, but I think that respect for our institutions is made plain by attending events like this.”

After the traditional tribute to the fallen, the King assumed an attention stance as the rain lashed down, before the soldiers’ parade got under way.

The display featured some 3,400 military and civilian troops, including a company of the Xa Bandera (Millan-Astray) from the Spanish legion with their characteristic goat mascot.

A novelty this year was the flying of the flags of those nations which comprise NATO’s Very High Availability Force, which has been chaired by Spain throughout 2016.