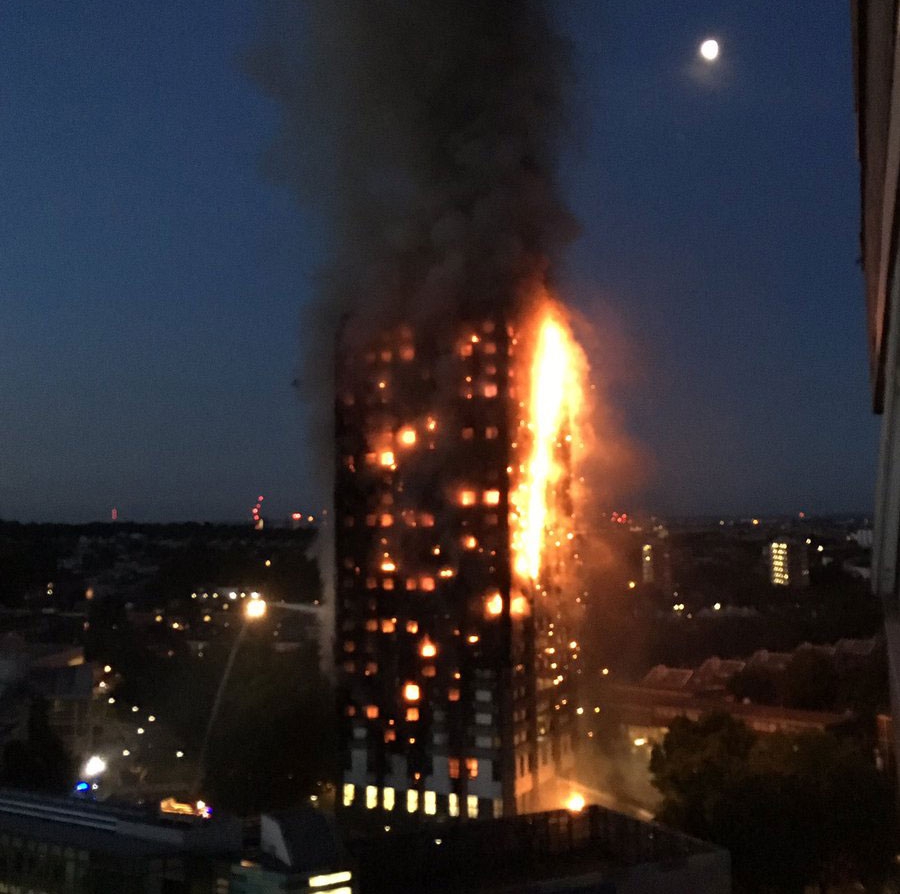 MORE  than 200 firefighters and 40 fire engines are battling a huge blaze at Grenfell Tower in west London. The emergency services  have confirmed there have been at least six fatalities.

The fire has spread thoughout the entire 24-storey building of 120 residential flats that was built in 1974.

Witnesses report that the blaze started on the second floor and within 15 minutes the entire building was ablaze.

“This is a large and very serious incident and we have deployed numerous resources and specialist appliances.”

The Metropolitan Police have issued the following statement:

“We can confirm six fatalities at this time following the fire in North Kensington in the early hours of this morning, Wednesday, 14 June. These are very early stages and we do expect that figure to rise.

“Police were called at 1.16pm to reports of a large fire at a block of flats at the Lancaster West Estate, W11. Officers were sent to the scene to assist colleagues from the London Fire Brigade (LFB) and the London Ambulance Service (LAS).

“Residents have been evacuated from the tower block and a number of those have sought medical assistance from the LAS.

“Commander Stuart Cundy, from the Metropolitan Police, said: ‘Our thoughts are with everyone involved in this truly shocking fire at Grenfell Tower.

“‘I can confirm six fatalities at this time but this figure is likely to rise during what will be a complex recovery operation over a number of days. Many others are receiving medical care.

“‘If you do have any concerns for anybody connected to this awful event, please call the Casualty Bureau on 0800 0961 233. If you do not get through immediately, please try again. If you have any concerns, please use that number rather than dialling 999 or 101.

“‘If you are a resident who has been evacuated from the area and can’t now get home the current reception centre being coordinated by the local authority is at the Portobello Rugby club at Walmer Road. We urge anyone who lived in the block to make themselves known at that centre so that we know they are safe. If you are unable to get to the centre please speak to a police officer. This is really important as we account for all those in the building.

“‘Equally if you have reported someone missing and they are now safe and well it is really important that you contact Casualty Bureau so that we can keep an accurate record of who is missing and who is safe.

“‘We kindly ask that the public stay away from the area. I thank the public for their patience and their cooperation today which has already greatly assisted our policing response.’

“Commander Cundy added: ‘There are a significant number of officers at the scene who are continuing to work with the other emergency services and agencies. I’d like to thank my officers and colleagues at London Fire Brigade and London Ambulance Service for the sterling work they are doing at this time.’

“Extensive cordons remain in place and a number of nearby residents have been evacuated as a precaution. The A40 is closed in both directions.

“It is likely to take some time before we are in a position to confirm the identity of the victims.

“It is too early to speculate on the cause of the fire.