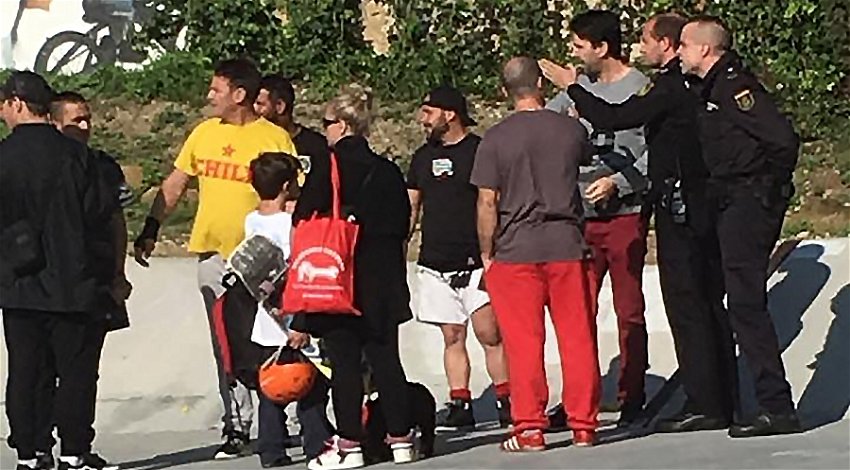 ON Sunday, there was a rumble at the skate park, well when I say “rumble” I mean tussle. I’m not sure it even counts as that… maybe someone got pushed off a skateboard.

I was watching Harry, my eldest, scoot about doing tricks and missed the incident (annoying).

What happened next was beyond exciting; a large group of men convened to discuss ‘the incident’ and at one point, a woman carrying a little black dog turned up from goodness knows where and got stuck in. I was there when ‘it’ happened and I have no idea what went on, so how could she?

The police even came to join the debate as well. There were some fire crackers set off, adding to the sizzle of tension in the air. Come to think of it, maybe it was the bang of the fire crackers that attracted the police. They were smiling though, so I further deduced that not much was going down.

Everyone was smiling really, except black dog woman, she wasn’t smiling, probably a mother of one of the boys… I understood. It definitely involved the moody 15-year-old who was boarding about in an irked fashion, at one point he kicked a bin (it didn’t even fall over).

That was all I could ascertain; having already taken photos of the group I thought if I went over to eavesdrop, it might be deemed too much. Anyway, I’d have to ask them to talk a lot more slowly, one at a time, with accompanying illustrative mimes, to have a chance of understanding what the incident was and why a bin had not been kicked over.

Harry was oblivious / completely uninterested in all of it. He was too busy scooting and paid no attention whatsoever to the grown ups chatting in a circle. Nick and my youngest, Sam, missed the action too. He is not into extreme sports and was playing football with Nick.

The whole episode lasted for about 45 minutes. I’m not sure much was resolved but I was delighted to see handshakes all round as they obviously decided to go home for lunch. It was 3pm, Spanish lunchtime – crazy, you’ll be pleased to hear we have stuck to the old routine of 12.30-1pm; integration into the Spanish culture can only go so far, messing with the minions’ feeding times only leads to trouble.

We took a picnic to the park, well I say picnic, a whole baguette, a packet of ham and pieces of fruit were slung into a rucksack, last minute.

Domestic goddess Nigella Lawson, I am not. It is all about time efficiency when trying to leave the house.