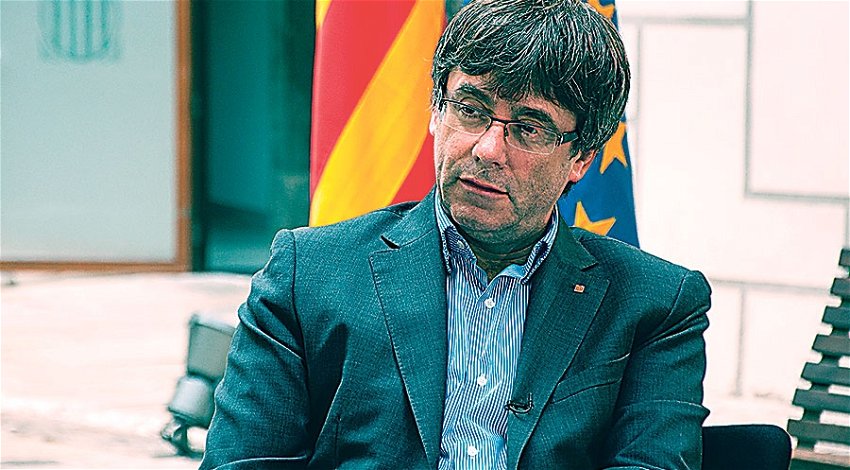 ON what should have been Independence Day, pro-secessionist crowds gathered as near to the regional parliament as the police would allow, ready to welcome the Catalan republic.

Silence reigned as Carles Puigdemont’s expected UDI declaration inside the parliament chamber was diluted into plans for dialogue over several weeks before severing links with Spain.

Some booed and others went home and meanwhile all the pro-secession MPs signed a piece of paper assuring themselves, the world and their voters that there will be a republic. Eventually.

In the words of the song, ‘He didn’t say yes and he didn’t say no’ but it could be enough to get Article 155 slapped on Cataluña.

Was his failure to declare outright independence influenced by the big businesses already leaving Cataluña?

The Sabadell and La Caixa banks, which operate nationally, have moved their registered head offices to Alicante and Valencia respectively.

Some names packing their bags mean little to outsiders but Cola Cao, Nocilla and Bimbo are part of every Spanish childhood while San Miguel – that’s another familiar one – has left for Malaga where there has been a plant since 1966.

Cava giants Codorniu and Freixenet will move their headquarters if UDI is declared and even the pro-independence multinational pharmaceutical group Grifols would leave after a UDI.

This was always the weapon that would hurt most.  More effective and far more painful than baton charges.

DEMONSTRATIONS protesting at Catalan secessionists’ disdain for the Constitution and their Statute of Autonomy finally arrived.  Did the pro-independence politicians believe – or hope – that only the national government had noticed what was going on?

The silent and hitherto silenced minority inside Cataluña found its voice and demonstrated in favour of Spanish unity, sending a clear message that Carles Puigdemont, Oriol Junqueras and Anna Gabriel ignore at their peril.

PODEMOS SUPREMO Pablo Iglesias insisted weeks ago that there are political prisoners in Spain.

Perplexingly Iglesias won’t acknowledge the existence of political prisoners in Venezuela, whose government once paid him and other Podemos politicians handsome sums for their advice.

Doubtless if Carles Puigdemont ends up in the slammer he, too, will be regarded a political prisoner, which will make the pair of them happy.  Puigdemont can become a martyr and Iglesias will have a big stick that he can use to beat everyone with except himself.

Not to be believed

THERE was the usual ration of fake news, some of it tweeted by Julian Assange.

It was also reported in the Daily Mail which, although it is no bastion of liberalism, loves to put the boot in whenever possible where Spain is concerned.

Nevertheless it was a relief to learn that two seedy-looking individuals giving the fascist salute in Madrid weren’t at the multitudinous gathering in Colon. Instead they belonged to a 30-strong min-demo in out-of-the-way Plaza Salvador Dali where they attracted more sniggers than cheers.

LAST word goes to Teresa Freixes, Professor of Constitutional Law at Barcelona University.  “A declaration does not give a state independence,” she said. “The Western Sahara declared independence years ago and look at them.” The Saharawis, it should be remembered, now live in tents in the Tindouf refugee camps in Algeria.