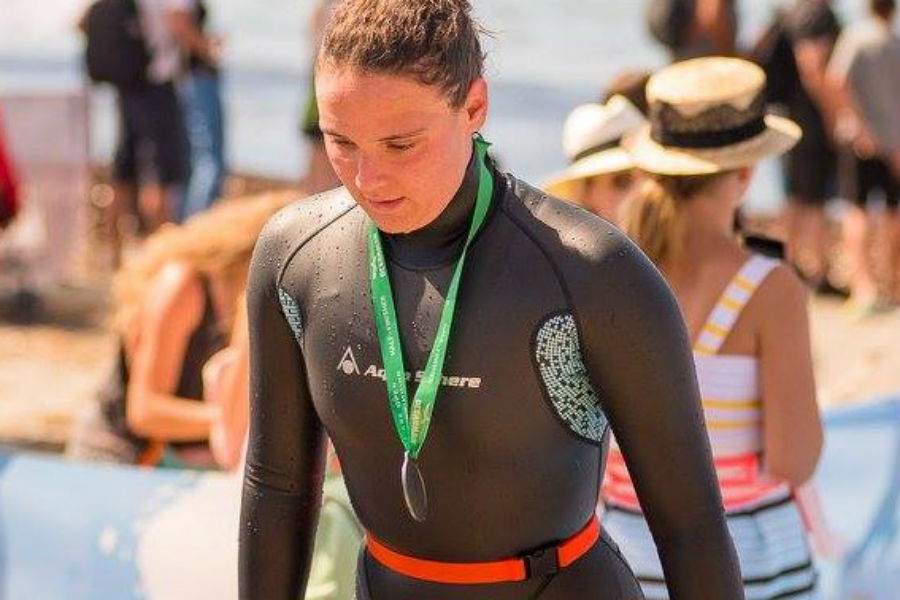 “I intend to participate in Oceanman for the third time in 2018. I’m going to try my best to maintain my title as World Champion,” said Zoe.

“Another goal for 2018 is to achieve Elite Athlete Status, as it will also help me get a place in a Spanish University,” said Zoe, who lives in Los Montesinos, Alicante.

“I am also aiming to get into the Spanish team for Fin Swimming. My aim is to win a medal in the Fin Swimming National Championships,” said ambitious Portsmouth born Zoe, who has lived in Spain for 10 years.

“Last year I was very close to achieving both goals,” said Zoe, who trains in the pool six days a week and also Fin-swims two days a week.

“When I don’t do double sessions I go to the gym for an hour, after swimming three times a week,” said Zoe, placed first, second or third in every race, with distances from 1,500m to 8km, in the 14 sea races during 2017.

“Each distance has its own difficulties. It always depends on the conditions of the sea,” said Zoe. “The most difficult part of any race is just after the second half, when the lactic acid kicks, and your muscles start aching,” said Zoe.

“It’s pointless putting extra pressure on. I do my best and have fun. I don’t think the experiences make it easier – you still give 110 per cent – but it helps you know how to swim it, what speed to go, when to go faster and slower,” said Zoe.

“It helps you to be able to control the waves – how to orientate yourself – and to not get lost or go off course,” said Zoe, who has been the youngest swimmer in a plethora of competitions.

“To know, not only am I placed highly in my age group, but also one of the better female swimmers in competition, is a fantastic feeling,” said Zoe.

“Every time I finish a race the first question I ask my parents, who are watching is: ‘How many girls have come in before me?’.”

“My parents signed me up for swimming classes when I was four and swimming has always been for me, without a doubt.

I started competing when I was seven and it’s been my life ever since,” said Zoe.

*NEXT WEEK: Zoe Connolly reveals the financial costs to compete – with competition costumes costing anything up to €400.