The charge of the tight brigade 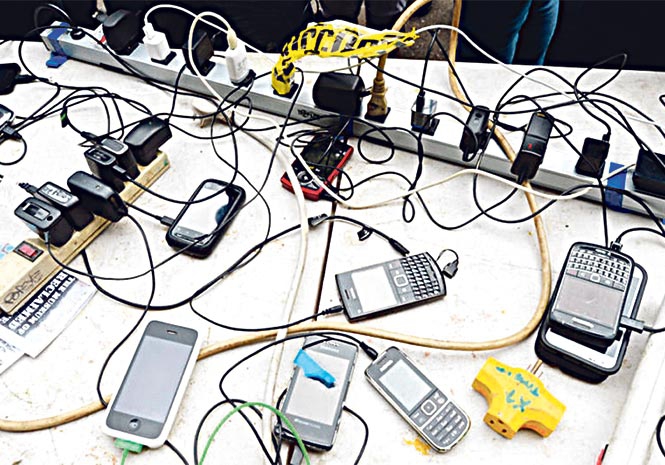 PHONE-CHARGING: Less than €5 a year.

These days ‘living dangerously’ is when your phone only has a 5 per cent charge, says LBA-sufferer Terence Kennedy.

NINETY PER CENT of people leave their phone chargers plugged in day and night. The other 10 per cent are either obsessive compulsives (guilty as charged m’lud) or planet-savers.

Depending on whose statistics you believe, a permanently-plugged phone charger consumes less than €5 of electricity a year. No, that’s not a misprint. Tell that to the coffee-bar owner who refused to let me charge my phone for a couple of hours there while I did other business, ‘unless you pay for the electricity.’ Will one cent do nicely?

LBA is now an acknowledged modern syndrome: Low Battery Anxiety. Typically that’s when it’s barely lunchtime and you’re down to 20 per cent and panicked. Manufacturer LG says nine out of 10 people suffer from LBA, while the rest of us just get on with our lives.

In our ‘always-on’ society, a dead battery is today’s best excuse, or genuine reason, for missing calls, not responding to messages or turning up late for appointments (‘I had to wait for my phone to charge.’)

An American survey revealed that in a low-power scenario and having to choose between hitting the gym and charging their smartphone fully, a third of those asked opted for the charging.

We have become so seriously charger-dependent. Most people charge their phones twice a day now, where my wife’s old Nokia happily used to chug along for a week or more.

It’s also surprising just how uninformed we are when it comes to the way we treat our batteries.

Gone, for instance, are the days when you should religiously charge a new phone for 24 hours before use, and then regularly run it down before recharging.

That worked with prehistoric nickel-cadmium batteries, but today’s lithium-ion packs don’t like being fully recharged and discharged; experts say it’s better to keep trickle-charging them more often, at between 40 and 80 per cent of capacity, and never leave them near-empty for long.

It’s also a myth that keeping your phone on charge all night will degrade the battery. Modern technology turns off the phone’s appetite, just like ours, when it’s full.

When you think about it, it is of course iniquitous as fewer and fewer phones now have replaceable batteries, that when the battery is finished so is the phone. Or could that be a plot by those now selling all those portable power banks by the zillions?

But underlying it all, here’s how you know you’re an LBA sufferer: if you’re asked to list your favourite position in bed, and you answer “Near the wall so I can use my phone while it’s charging.”