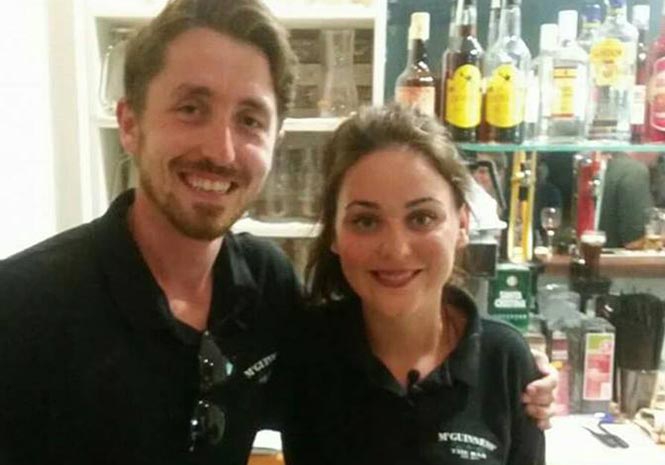 Hard at work: the couple in their Irish bar

AN EXPATRIATE couple who run a Manilva bar are set to be featured on the Channel 4 show ‘A New Life in the Sun’.

Danielle Carroll, 25, and Micheal McGuinness, 26, will be on the show in early February, but the husband and wife to be are not sure what to expect – or exactly when the programme will air.

Micheal explains: “We started watching all the episodes, more for research.”

When the second series ended and a message flashed up asking for participants for series three.

“Danielle looked at me and said ‘don’t you dare email them!’”, he laughs.

After being informed about a Skype interview the next day, “she went absolutely mental” he adds.

The Channel 4 show has been running for two series and details expats’ lives abroad.

The pair – due to be married in September 2019 – own the lease on the McGuinness Irish Pub, in San Luis de Sabinilla.

Originally from Newry, Northern Ireland, they flew out to Spain in March 2017, seven months after they got engaged, and had opened the venue by May.

They had previously been planning to move to Canada, but “fell in love with a wee Spanish bar”.

Micheal recalls: “It changed our perspective on life basically.”

“We were moving to Canada to do the same (office-based) thing.

“We wanted to do something for ourselves for a change.”

That was when the journey with A New Life in the Sun began.

Danielle recalls: “They filmed us all summer and followed our journey of opening our wee pub.”

The film crew came 16 or 17 times, according to the couple. Michael said: “It was quite intrusive really, if we were being completely honest.

“(But) we have to compliment the production team. They were very respectful and gave us a lot of control.

Micheal was surprised that there was little focus on the difficulties of setting up a venue in Spain.

“They were very focussed on our personal life. I really thought it would be more focussed on the negative aspects of opening a bar.”

He thinks the show improved the couple’s confidence, as they got used to cameras following them around.

The pair have only been told that the series will begin on February 5 but only that their episode will air in “early February.”

Micheal said: “Apprehensive is probably the word – to see how we come across on TV. Actually seeing ourselves on TV could be quite funny. The family can’t believe it!”