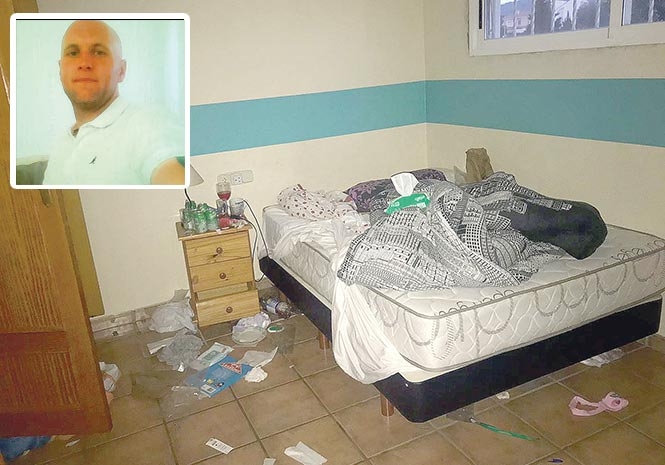 A BRITISH expatriate has warned Costa Blanca landlords after her villa was allegedly ransacked by a nightmare tenant who refused to pay rent before blackmailing her.

The British family left mouldy plates, take-away boxes, empty cans and stained sheets strewn all over the property when they moved out as well as causing thousands of Euros worth of damage.

Kelly Louise Metcalfe, 34, was initially pleased to hear her Benidorm-based letting agency had found her a tenant for her villa, but soon after they moved in on November 8 last year, the problems began.

Shortly after settling in, John Anthony Parkin – who lived at the property with his wife and children – began to claim there were ‘problems’ with the property and attempted to charge for replacements without providing proof appliances were broken.

Speaking to the Euro Weekly News, Kelly, from Burnley, said John “didn’t put the electricity or water bills into his name,” despite being warned he would be cut off by the energy provider if he failed to pay the bills.

“He would never call us when there was a problem,” she said, before adding that he did not settle a single bill, leaving Valencia-based Kelly and her husband Hector more than €1,000 out of pocket.

On one occasion, the tenant claimed the power had gone out and he “knew a friend who was an electrician” who could fix it.

As Kelly was out of the country and unable to answer, her letting agency agreed to let the friend take a look at the problem. Soon after however a €350 ‘bill’ was sent to Mrs Metcalfe quoting repair work which was not authorised.

“The bill was clearly fake,” Kelly said, “we found the supposed company on Google but it was a California based firm with no connections in Spain.”

After refusing to pay for the ‘work’ carried out without permission, tensions escalated, with Mr Parkin demanding €350 and refusing to pay rent or move out until he received the money.

Then in a series of texts seen by Euro Weekly News, he admits to never intending to pay the rent as he was “busy sorting things out and getting legal advice” and once again demands money be transferred to his account if they want him to leave.

One of the messages seen by Euro Weekly News

Eventually John agreed to meet the estate agent who would give him the money in cash – as Kelly did not want to send it directly to his account – after he signed a contract terminating his rental agreement ,but it was not the last time he would attempt to rip off the Metcalfe’s.

Kelly claims that when the estate agent arrived at the property he found that the washing machine was missing. When he confronted John about it he said there never was a washing machine. Husband Hector was called over the issue and it wasn’t until he said do not pay John that he changed his claim.

“He walked over to his van and opened the back and took the washing machine out,” Kelly said.

Mr Parkin and his family left behind destroyed furniture, bricks in the pool – which will cost hundreds to repair -and is believed to have been subletting the property without permission as there were beds found in the garage that were not there before. A flat screen TV that was there before they moved in is also missing. The damages alone are estimated to cost more than €1,000.

“The place stinks now, I’ve filed a report with the police in Benidorm, but I want to make sure others know of this so landlords beware,” Kelly said.

A post in an expatriate information forum for Costa Blanca on Facebook, the warning has been shared more than 1,000 times.

Parkin spoke to UK media about the claims and while he did not deny refusing to pay rent and bills, he said he had no time to clean the premises before he left.

“It wasn’t blackmail. Everything I have done is totally legal,” he claims.

Mr Parkin has been involved in incidents in the past in the UK, including attempting to set fire to a mosque according to the BBC.