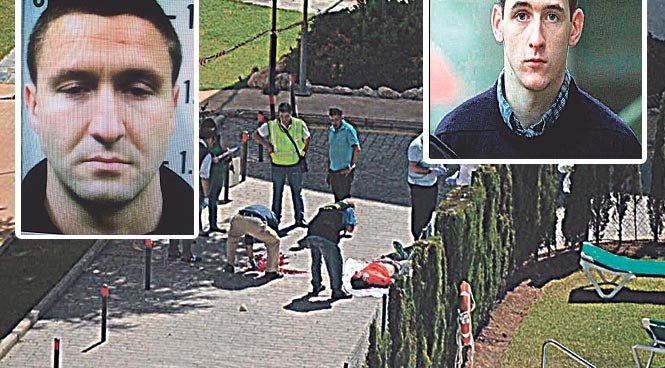 AN alleged contract killer accused of gunning down an Irish gang member on the Costa del Sol has claimed he was lying hung-over in bed with a prostitute when the assassination took place.

Prosecutors say that Irishman James Quinn donned a balaclava before lying in wait for more than two hours in the car park of a gated housing estate in Miraflores, near Fuengirola, after being dropped off by two unidentified accomplices.

But the father-of-one has denied shooting Gary Hutch, then 34, twice in the head at point-blank range after chasing him round a swimming pool.

The brutal hit on September 24, 2015 triggered a feud between rival crime families that has claimed at least 15 lives in Ireland and Spain.

Early in the hearing at a Malaga’s Ciudad de la Justicia court Dubliner Quinn told the jury of five women and four men: “I flew back to Spain from Dubai a couple of days earlier to attend a wedding.

“The morning of September 24 I was in bed with a hangover and a prostitute.”

When quizzed about the woman’s name by state prosecutor Jose Barba he replied: “I didn’t know her personally.”

Mr Barba had earlier described the assault as a “surprise attack,” explaining that investigators found the dead man’s car door open with his keys on the ground near his left hand.

“Quinn fired off some 15 shots as he chased his victim and they ran round the community swimming pool twice,” he said in his opening address. “Some entered the victim’s back and he fell on the ground with no chance of defending himself before the accused finished him off from close range with two shots to the head.”

The jury then heard that a baseball cap the accused swapped for his balaclava had been critical to identifying him.

Quinn later shook his head when shown the charred remains of garments recovered from his ‘getaway car,’ a BMW X3 stolen from Mijas and later found torched near Marbella.

Jurors were allowed to touch the clothes before inspecting the cap, which prosecutors say survived the blaze.

DNA found on the cap was matched to Quinn after undercover detectives snatched a bottle of water he drank from on a high-speed train while he was under surveillance in the wake of the execution.

Pedro Apalategui, defending, said: “The fact Gary Hutch suffered a violent death is not up for debate. The question is who killed him. I say it wasn’t my client.”

He went on to question how police had found the ‘practically new’ cap inside a gutted vehicle, insisting that it had never been mentioned before investigators obtained the DNA sample.

Two unlicensed guns allegedly used in the killing, a 9mm Glock 26 semi-automatic pistol and .45 semi-automatic Colt 1911 pistol, were found during a raid on his Benahavis home.

A witness, named only as Jose and speaking from behind a half-open door, told jurors: “I heard a loud noise and raced to the terrace and saw two men running round the swimming pool.

“I thought they were playing at first but then I saw one had a pistol in his hand and I realised it was something else.

“They reached a point where the victim had no way out and had to stop. He put his hands up and said ‘no, no, no’ and then I heard two shots and saw him fall to the ground.

“The killer had a black balaclava and black gloves on.”

Quinn could be handed only the second life sentence issued in Spain for 40 years if found guilty of murder, while he also faces an additional three-year jail term for illegal weapons possession.

The trial is set to conclude today (Thursday).