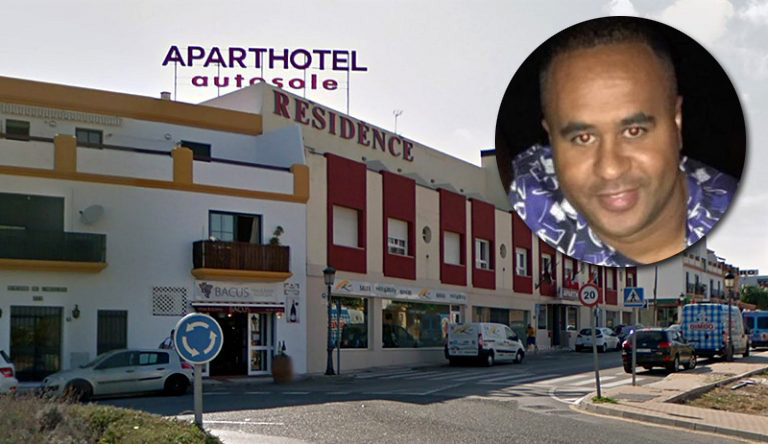 A BRITISH man who was shot dead by police on the Costa del Sol on Monday afternoon after he allegedly opened fire on them when they went to arrest him has been named.
Sean Hercules from Leeds is believed to have been in his late 30s and had served two prison sentences in the UK.
Officers had gone to arrest him at an aparthotel in Avenida Marqués de Duero in the Cancelada area of Estepona when he allegedly pulled a gun on them, and they were forced to shoot him to defend themselves and ‘third parties’.
The police had gone to the aparthotel following an incident earlier in the day in which a man, allegedly carrying a weapon, fled the scene of a car accident in Puerto Banus.
Officers quickly identified the man and traced him to the Cancelada aparthotel.
As they arrived to arrest him they were met with gunshots and fired back killing the man.
Police said in a statement, “The officers were subjected to several shots, forcing them to use their weapons to repel the aggression in defence of their physical integrity and that of third parties.”
Paramedics who attended the incident confirmed the death of the victim.
The deceased British man was reportedly found with two firearms and ammunition.
The Foreign and Commonwealth Office (FCO) confirmed the death of a British man in Spain but did not disclose his identity.
In a statement, the FCO said: “Our staff are in contact with the family of a British man following his death in Spain, and have offered them support and advice on bereavement abroad.”
The Yorkshire Evening Post has reported that in 2006 Sean Hercules was convicted of shooting a man outside the Warehouse nightclub in Leeds with a sawn-off shotgun and jailed for six years.
He had been given a previous prison sentence in 2001 for his involvement in a robbery at a post office on North Farm Road in Gipton.