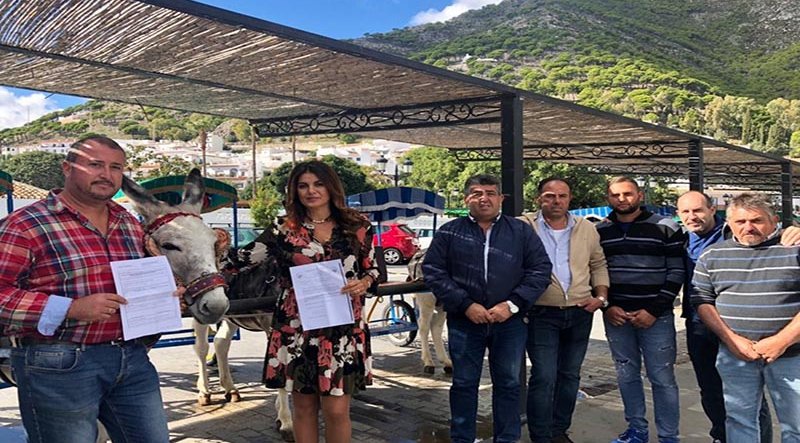 DONKEY taxi owners in Mijas on the Costa del Sol have protested about the “lies” spread by animal activist party PACMA following the death of one of their donkeys.

The Mijerian muleteers, called a meeting to protest and denounce PACMA following their claims a Mijas donkey died ‘in agony’ after failing to receive veterinary attention.
Also in attendance at the meeting was the councillor for Mobility and Transport, Nuria Rodríguez of the Ciudadanos party, providing support to what she considers an “economic engine for the town, as well as one of the largest tourist attractions of the municipality.”
Yesterday (Tuesday), reports emerged from PACMA alleging a Mijas donkey died ‘in agony’ after failing to receive veterinary attention.
The animal protection political party claimed they were “working on the complaint” with lawyers, alleging that the donkey’s treatment failed to comply to Andalucian law.
However, the Mijerian muleteers dispute this claim, detailing the actions taken to attend to the animal’s needs after it showed symptoms of abdominal pain.
The muleteers allege that on Saturday, November 3, the owner of the donkey called in an emergency veterinarian to attend the stables and examine the animal.
They claim the donkey underwent a thorough physical examination and it was clear its vital signs were altered and that the veterinary expert noted an abdominal distension with displacement of the animal’s colon.
The owners have provided a detailed list of the treatment the donkey in question underwent in an attempt to manage its sickness.  They claim the donkey received fluid therapy and that analgesics and a nasogastric catheter were fitted to decompress the animal’s abdomen.
The muleteers report that the treatment was unsuccessful in aiding the sickly donkey and that the animal died hours later.
In a press release this morning, the owner of the donkey, Salvador Torres, said: “The donkeys are part of our family. For us they are not work tools but companions and nobody loves them more than ourselves, we are all day with them and they are the ones who help us bring the bread home.”
Mr Torres said that his donkey “had at all times the same attention as all the animals.”
Denouncing the accusations of PACMA, the muleteer added: “They have taken advantage of a tragic situation for us to hurt us emotionally and professionally. You cannot lie that way and we are going to study the legal actions that we have at our disposal.”
Mr Torres even claims the photos that appeared in PACMA’s report were taken of the animal on Sunday after the donkey after its death and that therefore claims of neighbours hearing the animal crying in pain were false: “The photo that they have made of the animal is of 24 hours after his decease reason why, like any alive being, after that time deceased the body swells”.
He explained why the animal was present in the stables 24 hours after its death: “When a donkey dies, we cannot bury it or do whatever we want with it. All this has a protocol that must be respected and we do so.”
The municipality of Mijas also presented their full support for the Mijenian Muleteers, Nuria Rodriguez backed the ‘productive’ service: “We have already held the first working tables for the promotion of the new ordinance for this productive segment of our municipality, with the quality of life of the donkeys the fundamental premise.”
Mayor of Mijas Juan Carlos Maldonado added:  “Taxi donkeys are one of the major tourist attractions that the city has and we have to combine that heritage we have with the welfare of our animals, which also helps to enhance the image of Mijas as the friendly municipality that is with all of them.”