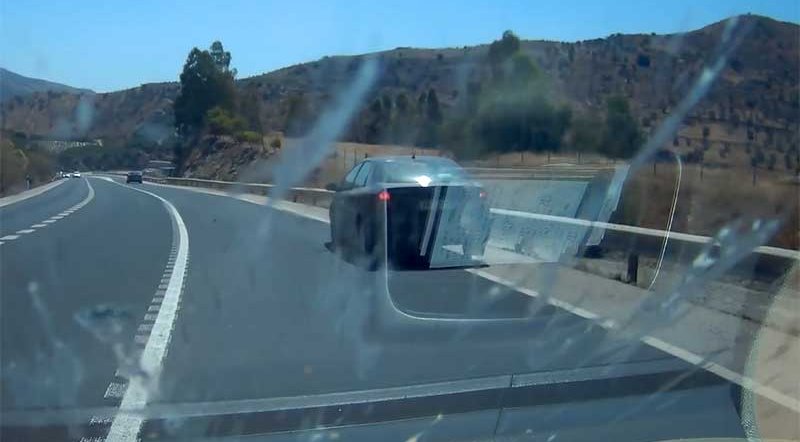 DRIVERS in Spain have been warned to watch out for robbers who are targetting cars with eggs and forcing drivers to a stop as they have to clean the windscreen.
Amazing dashcam footage captured in the south of Spain has perfectly shown the modus operandi of the gangs that lob eggs at cars travelling in the opposite direction.
The alleged robbers hope the drivers will use their windscreen wipers to clear the mess but that action actually makes their vision worse and forces the vehicle to pull over to a halt.
https://www.facebook.com/pcackett/videos/1899173466827866/
And that’s when a second vehicle, travelling in the same direction as the ‘egged’ car swings into action.
The incredible video was shot by Peter Cackett who said: “Watch the car that threw the egg and then observe the one parked on the right going down the hill waiting for me to pull over.
“You see me pass him – notice he has his brake lights on – ready to follow me which he did.”
Peter said he was travelling on the A-356 from El Puente, Alcaucin, past the lake at Vinuela, going down towards the coast and it occurred before he got to Trapiche.
“I got both number plates, the car that threw the egg and the one who was waiting to rob me if I would’ve stopped.”
He said: “The important thing is not to put your wipers on. If you do then your whole windscreen will be obscured.
“And don’t stop to clean it off, that’s what they want you to do.”
“They then offer to help you clean it and whilst you are pre-occupied they rob you in whatever way they can.”
Peter said the Guardia Civil in Periana were very helpful when he reported the incident.
Police advice is: “If you have an egg thrown at your windscreen then slow down safely and make an assessment as to whether you can see out of your windscreen.
“Don’t be tempted to wash it off with your water and wipers as this will cause smearing and make it worse.
“If it is safe to do, drive slowly away from that location to a built-up, well-lit area where there are people about, before you get out your car to clean the windscreen.”
The UK’s Foreign and Commonwealth Office travel advice for Spain says: “Be aware of ‘highway pirates’ who target foreign-registered and hire cars, especially those towing caravans.
“Some will (forcefully) try to make you stop, claiming there is something wrong with your car or that you have damaged theirs. If you decide to stop to check the condition of your/their vehicle, stop in a public area with lights like a service station, and be extremely wary of anyone offering help.
“When driving, be wary of approaches by bogus police officers in plain clothes travelling in unmarked cars. In all traffic-related matters, police officers will be in uniform, and all police officers, including those in plain clothes, carry official ID. Unmarked police vehicles have a flashing electronic sign on the rear window which reads Policía (Police) or Guardia Civil (Civil Guard), and normally have blue flashing lights. Genuine police officers will only ask you to show them your documents and will not ask for your bag or wallet/purse.
“If in any doubt, you should talk through the car window and contact the Guardia Civil on 062 or the police on 112 and ask them to confirm that the registration number of the vehicle corresponds to an official police vehicle.”