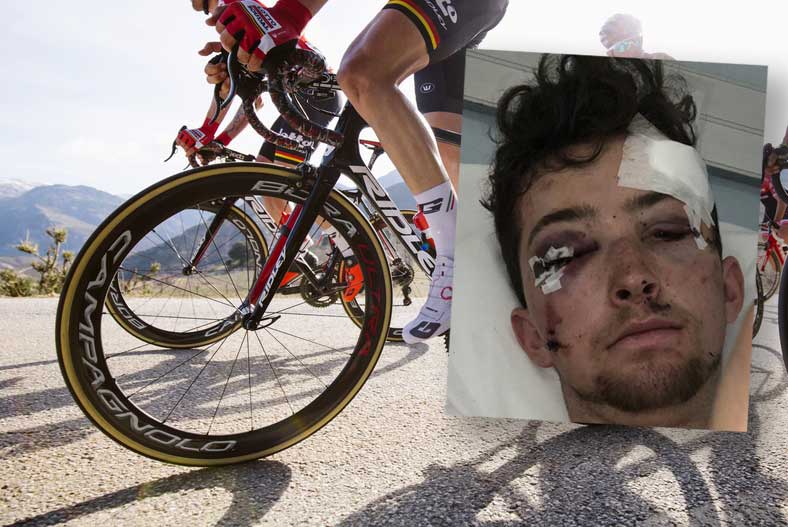 HORROR BIKE CRASH: Scott Auld was on a training ride near Benidorm in Spain when the accident happene. Photo credits: Shutterstock and Twitter / @SAuldCycling

A PROFESSIONAL cyclist was lucky to escape with his life after colliding with van and being thrown from his bike and down a ravine near Benidorm on Spain’s Costa Blanca.

Scott Auld, from Stockton, who rides for Ribble Pro Racing, was on a training ride when the accident happened.

Auld told his local paper, the Darlington & Stockton Times: “We were riding two abreast and around a swooping left-hand corner, doing 50 to 55kph.

“A van came around in the opposite direction, about a metre or two onto our side of the road.

“I remember seeing him coming as clear as day.

“We braked, readjusted and for a split-second I thought ‘we’ve missed him’. I was second wheel and my friend’s arm caught the wing mirror. It completely smashed apart. As I was turning he has clipped my back wheel and I have flown over my friend.

“The last thing I remember was flying towards this signpost and thinking ‘this is really going to hurt’.

“I clipped the signpost and landed on rocks and stuff.”

Auld was found by a team-mate lying face down in a pool of blood.

“Luckily, one of our friends was about a minute behind.

“He came down and saw all the bikes in the road. He said at first he didn’t even know where I was. He was like: ‘Where’s Scott?’

“He looked over the ravine and he saw me lying face down in a pool of blood. He woke me up and we eventually got an ambulance out and I was taken to Benidorm hospital.

“At the time, because I was full of adrenaline, I didn’t think it was too bad. But then about nine people came and stood around me and I thought ‘Oooh, I must be pretty banged up’.”

Auld said he hoped to be back on his bike soon as he is due to compete in a UCI race in France on March 10.

“I have a cast on my arm, but it doesn’t hurt. I will take it day by day, but I want to be back training as soon as possible, I don’t want to be missing too much time for a stupid accident like this.”

“The main issue is sight, I can’t really see anything,” he said.