Legion thanks EWN for “staunch” support 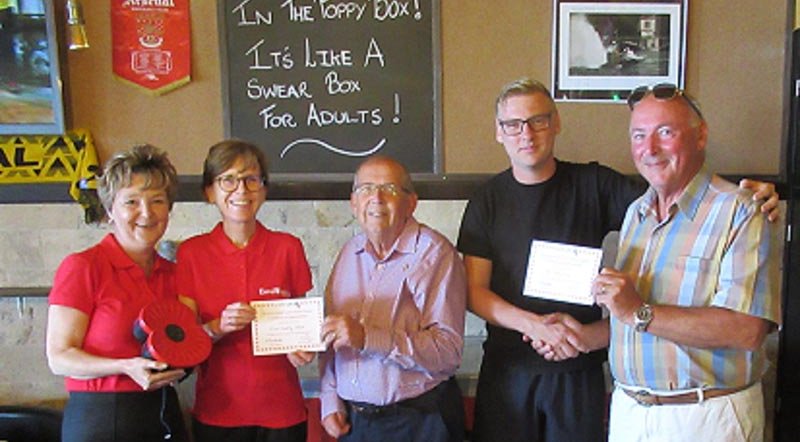 RECOGNITION: RBL Mojacar chairman Andrew Richardson and branch organiser Nick Allbeury show their appreciation to the Euro Weekly News and The Salty Dog for their support.

THE Mojacar Royal British Legion has expressed its thanks to the Euro Weekly News for being a “staunch supporter” of the association.

RBL Mojacar organised Tuesday’s presentation at The Salty Dog in Mojacar Playa to officially recognise not only the support of the EWN, but also of local businesses and associations which this year have raised money for the RBL Mojacar branch Poppy Appeal.

The Salty Dog came up with a particularly innovative way of raising funds for the RBL. When owner Jay got fed up with Brexit talk his solution was to turn an irritation to good. Jay warned that anybody letting slip with the dreaded ‘B’ word would be fined a €1 penalty and asked to donate the money to the Poppy Appeal box. The result, €135!

RBL members, the general public and businesses throughout the Costa Almeria area raised an impressive €14,000 for the RBL Poppy Appeal last year.

Commenting on the fantastic local fundraising efforts, Andrew told EWN, “There are so many supporters it is difficult to pick out a few. This year we decided to choose those businesses and organisations which have annually contributed over €100 euros to the Poppy Appeal and award a small token of gratitude in the shape of a certificate of appreciation.

“However I would like to thank everybody, from those who have helped with a few euros to the businesses with large donations. Every euro is valuable to those in need. Thank you to you all.”

If any of the EWN readers have a business in the Costa Almeria area and believe they can assist in the collection of funds or hold an event to raise money for the Poppy Appeal, contact RBL Mojacar branch organiser Major (retired) Nick Allbeury MBE by e-mail at: [email protected]