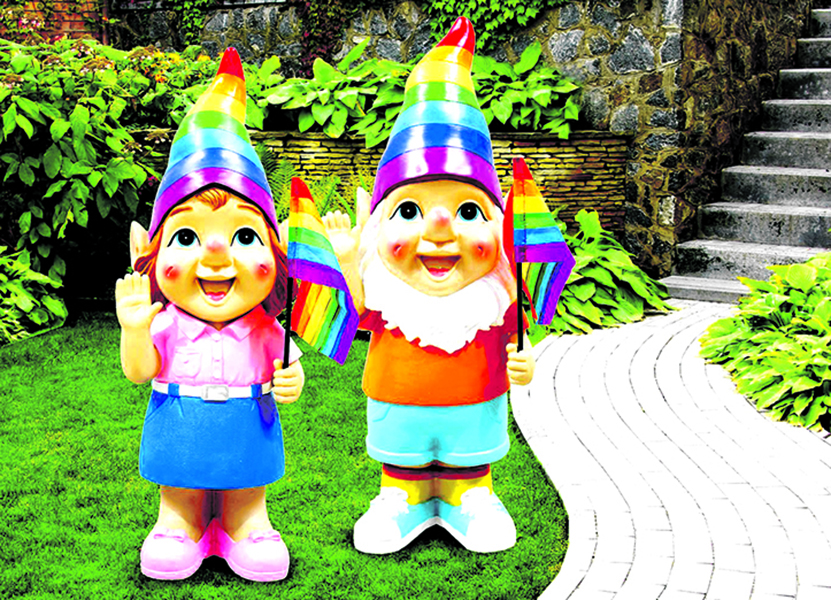 GARDEN GNOMES: were decked out in rainbow colours

I HAVE a love/hate relationship with Facebook. I love it because it is an invaluable tool for directing traffic to two websites I operate: the atheist site the Freethinker and the humanist Pink Triangle Trust, a UK LGBT charity.

But I loathe it because it serves as a conduit for millions of dotty posts by imbeciles sounding off about utterly insignificant things. Or, as Michel Euesden, CEO and founder of Euro Weekly News posted on my Facebook page recently, ‘people don’t half sweat the small stuff!’ She was commenting on an item I posted about an Asda customer in Plymouth who went into meltdown about some garden gnomes that had been decked out in rainbow colours.

Such was his rage, the plods had to drag him out of the store. It was a clear-cut case of gnomophobia. Although people use Facebook to moan about all manner of things, what mainly seems to spark hysterical rants relate to LGBT issues. The most recent example of this can be found among the comments on the FB page of a crazy Christian outfit called the Illinois Family Institute.

IFI vented its fury over the fact that Amazon had withdrawn books written by a ‘gay cure’ quack, the late Dr Joseph Nicolosi, a man whose work in ‘curing’ homosexuality left many lives in tatters, and may well have led to a number of suicides. One comment read: ‘Wow. Just wow. It will only be months before the same pressures will come against those who sell (or distribute) Bibles.

Where am I living?’ People ‘sweating the small stuff’ is, of course, not confined to Facebook. Newspapers can’t get enough stories of folk getting a stick up their bums over inconsequential issues. This inspired some genius to start a hugely entertaining Facebook page called Angry People in Local Papers. One report concerned pensioner Harty Ervine who tore into Asda because it ran out of his favourite 34p sardines. He told Chronicle Live that he has been left ‘suffering’ after stocks ran out. Then there was this headline on the StokeonTrentLive website: ‘It was so high you could get lost in it – OAPs call on council to trim grass more often after just two cuts in 2018.’

And from the Evening Telegraph, this headline: ‘Dundee man barricades himself in shed and sleeps overnight amid spat over allotment plot.’ As I was scrolling through dozens of ‘angry people’ reports it became clear that most folk who blow their gaskets tend to be older men.

This from the HuffPost: ‘A recent study out of Oregon State University found that older men who tend to obsess over little, everyday annoyances tend to live shorter lives than those who let things roll off their backs. ‘It’s not the number of hassles that does you in, it’s the perception of them being a big deal that causes problems,’ Carolyn Aldwin, the Director of the Centre for Healthy Ageing Research at OSU, said in the study, ‘Taking things in stride may protect you.’ I’ll bear that in mind the next time I’m on the verge of scurrying around in a blind panic and screaming ‘where the hell have I put my bloody phone NOW!’