Choices, choices: have them both? 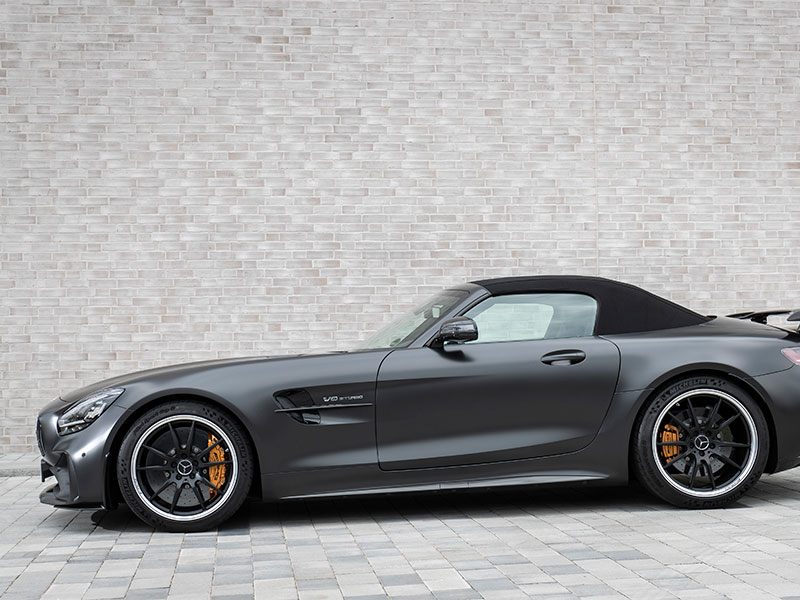 TWO cars on the horizon are the Lotus Evija and the Mercedes-AMG GT R. Both are looking for buyers now, yet one you may have to wait a little longer for delivery than the other. So time enough to get sated rather than bored before having yet more fun with the second.

The Mercedes-AMG GT R is available now for deliveries in the autumn and uses a hand built biturbo four-litre V8 engine to push this supercar from 0 to 62 mph in 3.6 seconds. The Lotus Evija will go a little faster, but let’s not get too far ahead of ourselves as they are very different cars.

Back to the Mercedes-AMG, its top speed is electronically limited to 197 miles hour. Yes, that’s a lot and there are going to be few roads that will permit the attempt to reach that top speed without winning a long conversation with an angry speed cop and a large fine. Though of course there is always the track if you really must push through the gate.

The Roadster has a triple layered soft top whose elaborate structure is fitted with what Mercedes describe as an ‘acoustic mat’ to reduce noise. The soft top is naturally made to be opened and closed and comes in three colours black, red or beige.

Why beige? No idea, though thoughtfully the soft top may be deployed while at a standstill to entertain the gawping pedestrian or at speeds of to 31 mph, a very precise and German upper limit.

Fully kitted with AMG highlights and enhancements from the Performance Exhaust to the Performance Headlights, ‘climatised seats with a memory package; air scarf with neck level heating,’ the Roadster is on the road from £178,000.

The Lotus Evija, emits no carbon at all. It’s also the first British all electric Hypercar meaning it has a top speed of 200mph and will get from 0 to 62 mph in less than three seconds. Weighing in at just 1,680 kg’s the Evija is certainly no Mercedes-AMG GT R the aesthetic is utterly different while both convey even while stationary the capacity for agility, speed and savage yet controlled acceleration they do so with utterly different sensibilities.

The Evija benefits from a power train developed by the scion of the F1 and Formula E Williams racing team, and Lotus’s technical partner Williams Advanced Engineering. Lotus and WAE have developed a mid mounted power pack immediately behind the two seats that supplies energy to the four powerful e-motors, with a target weight of just 1680kgs Lotus expect the Evija to be the lightest pure electric Hypercar to go into series production.

The Evija incorporates recently developed techniques and technologies tested on the racetrack from the Formula E series as well as Le Mans. Inspired by Le Mans race cars an intriguing exterior element are the Venturi Tunnels which pierces each rear quarter of the Evija, directing airflow through the bodyshell.

A visual exclamation mark yet this design element pursues a concept known as ‘porosity’ the delivery of high energy air flow to the rear of the car, this reduces the low pressure behind the car and so reduces drag. The car goes faster!

When viewed from the rear each Venturi tunnel is illuminated with red LED evoking the afterburner effect of a fighter jet especially when seen at night. To make the point Lotus fit an extra LED hidden within the tunnel to illuminate its interior. Two supercars with striking exteriors, two super powerful powertrains, two amazing decisions to make or just one. Which to choose? An entertaining time to be hand in making the choice.