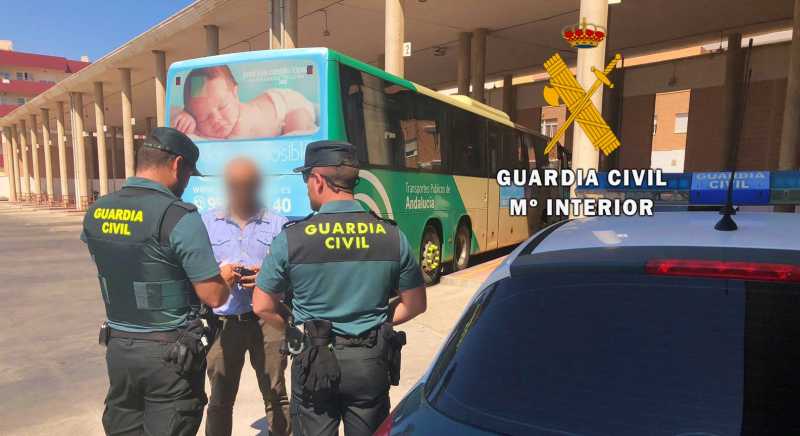 CLEARHEADED: The victim said when the effects of the drugs wore off he hightailed it back to Jaen and reported his ordeal. CREDIT: Almeria Guardia Civil

GUARDIA Civil have arrested two men for holding a holidaymaker against his will and feeding him drugs for two days to force him to hand over ownership of his car.
The victim contacted the Guardia after he managed to get away from his captors in Roquetas de Mar
and make it to Jaen. He told the Guardia he was staying in Roquetas where he has a holiday home when he was effectively kidnapped.
He claimed someone he had never met before approached him about buying his vehicle and invited him to go to a nearby apartment to discuss the details. As soon as they got there the victim realised the property was being used for drug sales.
He was made to stay there for 48 hours, continuously drugged up, to the extent he lost all sense of time, he maintained. The captors then took the victim in his own car to an agency dealing with administrative matters with the intention of getting the vehicle put in one of their names; at it turned out it was not possible due to the outstanding payments on the car.
Frustrated, the pair forced the victim to take them to his own apartment. Here they threatened him and ordered him to stay put until the following day when they said they would have another go at getting the car ownership transferred, this time in the provincial traffic office.
Next morning, the victim, by now clearheaded, headed straight for the bus station and hightailed it back to his home in Jaen.
The Guardia identified the two suspected captors as 31-year-old M.L.S. and 25-year-old Y.G. The pair face charges for illegal detention, drugs, vehicle theft and stealing from a property.
The Guardia also said further arrests have not been ruled out.