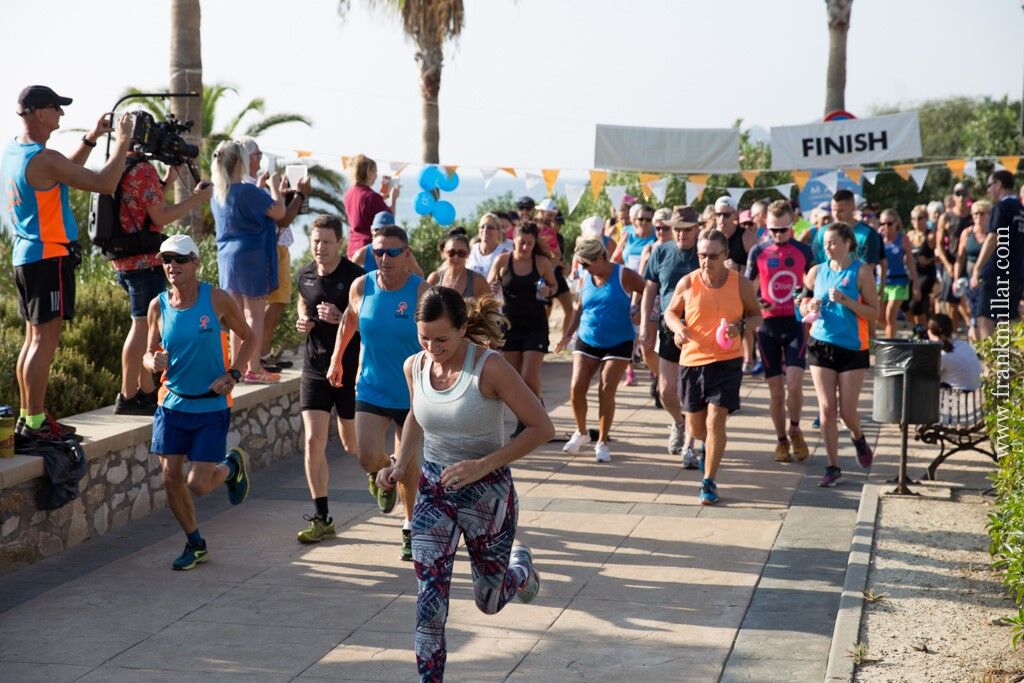 THE first fundraising Run Mojacar proved to be an all-round winner.
Not only did more people take part than expected, the event raised a grand total of €1,047 for the local MACS cancer and PAWS-PATAS animal charities.
Devised and organised by El Bandido Runners-founder Kevin Rowe and by Daniel Laws, the run staged on the last Sunday of September on Mojacar Playa’s seafront promenade attracted 118 people participants of all ages and fitness levels. Some walked, others jogged or ran the five kilometres by the sea. A few even managed to complete a half marathon.
The Garner Family from Spanish Property Choice were filmed at the event walking PAWS-PATAS dogs from the animal shelter for season four of the popular TV programme Sun, Sea and Selling Houses, due to air next year. Jackie Miles-Kirby gave sports massages and Portia Oliver encouraged participants with yoga stretching pre-race warm up sessions.
“The event was a great success”, Kevin commented.
“The competitors really enjoyed themselves. There was lots of laughter and a warm atmosphere and camaraderie with people cheering the runners along. There was a great sense of community spirit”, Kevin stressed.
“All the volunteers worked really hard to pull it together, and there were no accidents or litter left behind”, Daniel added.
“We aim to make it bigger for next year: all the way to Garrucha”, Kevin has now promised.
Commenting on the funds collected for the two charities from the run, PAWS-PATAS’ Chrissie Cremore described it as an “amazing amount.”
Chrissie revealed the animal charity planned to put its half share of €523,72 towards renovating a kennel at the shelter in the name of PAWS-PATAS volunteer Caroline Johnston, who tragically died of medical complications following a wasp sting just days before her 62nd birthday in August.
“She was a tremendous, enthusiastic, positive lady, who encouraged many people to help the animal charity”, Chrissie told the Euro Weekly News.
“Caroline volunteered for 30 years for PAWS-PATAS and undertook a myriad of tasks, be it cleaning, fundraising or dealing with people adopting dogs. Caroline was especially insistent about removing the dog doo from the shelter and always undertook such a task with great gusto! She is sorely missed.”


The kennel in question is in what Chrissie described as “a sorry state”, and to renovate it will cost €3,000. If anyone is interested in contributing to Caroline’s memory, they should visit the PAWS-PATAS website www.paws-patas.org or email [email protected]
The team behind the Run Mojacar initiative has meanwhile a issued huge thanks to all the El Bandido community for making it possible to raise the funds for both PAWS-PATAS and MACS. They have also expressed their gratitude to the event sponsors: Not Just Travel, Frank Millar and Jemma Wilson from Rosie Lees, who donated 200 bottles of water for the participants.

—
If you have enjoyed this news article, please note that our current charitable activity is on behalf of Cuidad de los Niños orphanage in Malaga.
If you would like to make a small contribution to this cause it would make a great difference to the orphans of Malaga!
Please donate at: https://www.gofundme.com/f/beunited-for-malaga-orphans