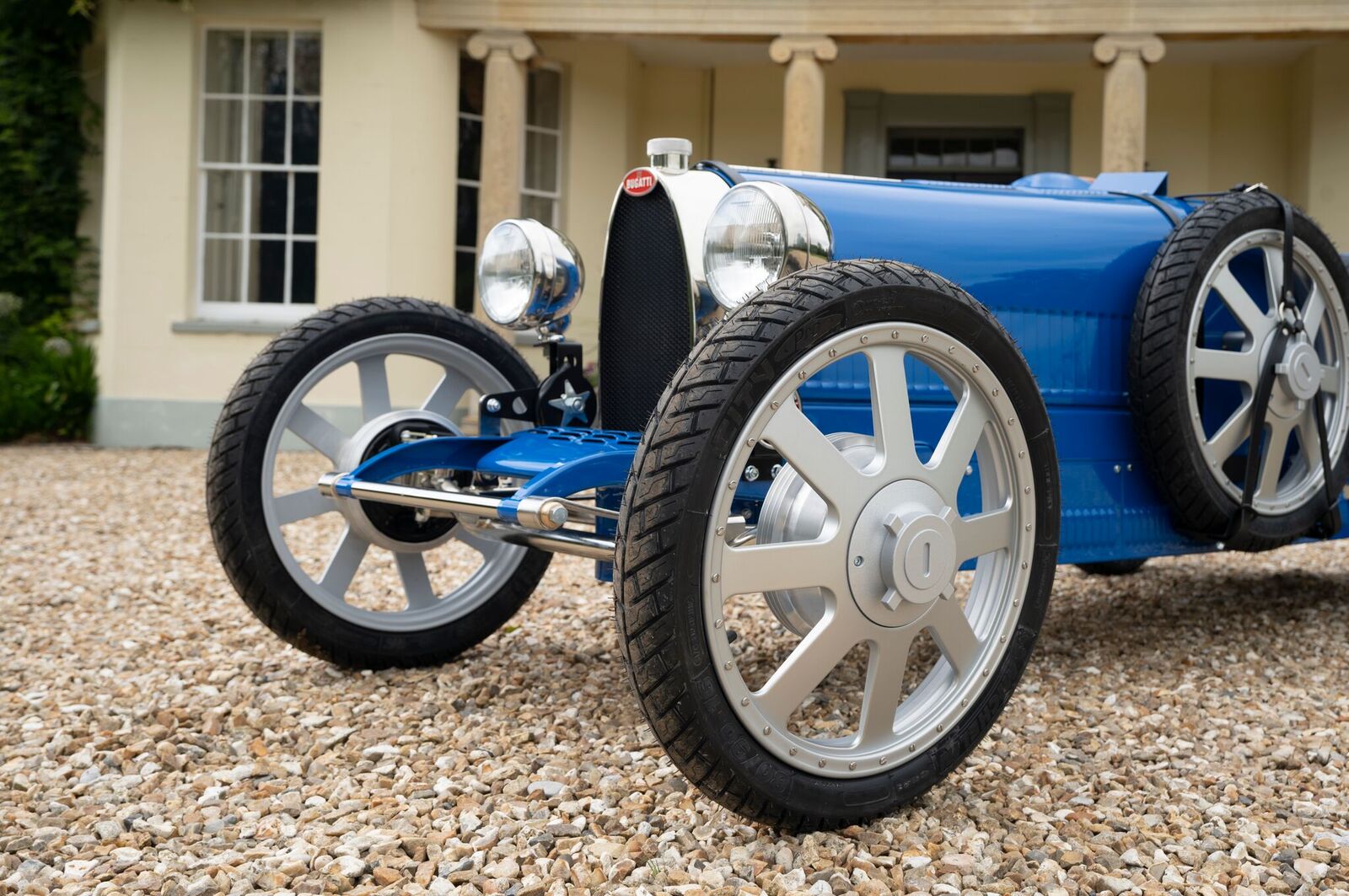 The original Baby Bugatti was a gift by Ettore Bugatti to his son Roland for his fourth birthday in 1926. The toy car was a half scale of the Type 35 built for the 1924 French Grand Prix at Lyon. The response from customers to this charming present was so strong that some 500 Baby Bugatti’s were manufactured between 1927 and 1936.

The Baby Bugatti II unlike the original is designed to be driven not only by children but also by adults with the scale pushed up to three quarters rather than half scale. The inclusion of a sliding pedal box accommodating adults when they manage to wrest the car away from the child. Also redesigned for the modern era is the drive train, now electric and powered with lithium ion batteries and regenerative braking the BB II comes in three specifications. With a composite body, with a carbon fibre body and a “speed key”, and the BBII Pur Sang with a hand crafted aluminium body and “speed key”. Speeds of up to 45 km/h indicate the driving experience  that young and old  will enjoy. A remote control key to disable the car at up to 50 meters range, just in case a driver gets carried away. In short the BBII is expected to be fully enjoyed by collectors as well as their grandchildren.

The innovative in its day eight spoke alloy wheels are replicated though now clad with modern Michelin tyres. The lightweight hollow front axle has been reproduced as has the suspension and the signature steering mechanism from the original. The cockpit is dominated by the four spoke wood steering wheel in front of the turned aluminium dashboard on which are mounted custom Bugatti instruments. The original cars had a tachograph with oil and fuel pressure gages, these have been replaced with a speedometer, battery level indicator and power gauge. The clock used for measuring race performance in the Type 35 remains. The fuel pressure pump has been repurposed as a forward  / reverse control. All BB II’s be equipped with a rear view mirror, handbrake, headlights and the essential horn.

The exterior of the Bugatti Baby II is faithful to the original Bugatti Type 35 and will be painted as standard in French Racing Blue with a black leather interior. Naturally other colour options are available for both the exterior and interior. Actual manufacture and production is due to start in early 2020 and the option to join a Reserve List is still possible, just in case a prospective buyer should change their mind. Prices start at 30,000 euros [plus local taxes and delivery of course]. Deliveries are expected to conclude during 2021.