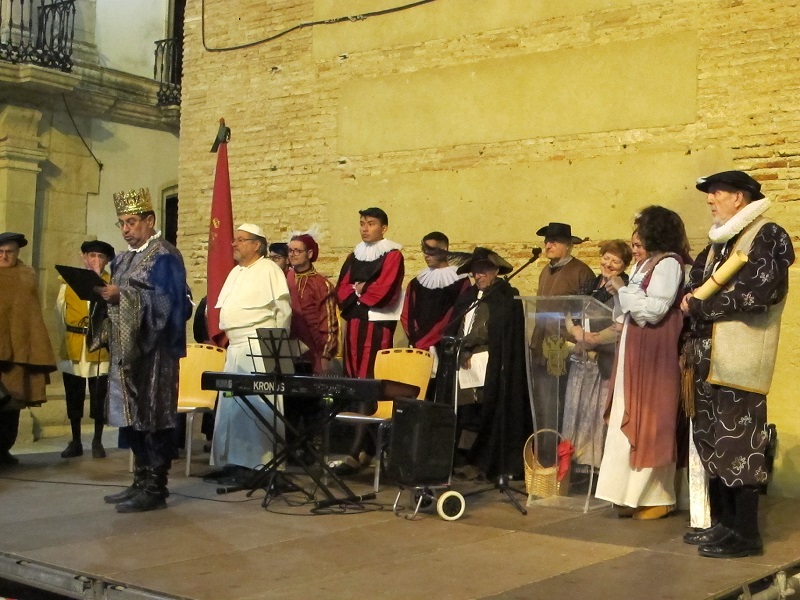 LOCAL HISTORY: Costumed characters narrated what happened on the fateful night of November 9 1518 before a minute’s silence in memory of the victims

VERA has paid homage to the 150 victims of the 1518 earthquake which destroyed the original town on the anniversary of the tragedy.
The municipality marked the occasion with a dramatised tour around the town’s most important monuments organised by the council’s Culture department and the No eres de Vera si… residents’ association.
Local people in character as figures from the times narrated what happened on the night of November 9 501 years ago and in the aftermath of the natural disaster. The Hospital Plaza, the Victoria Convent, the Fernando V Plaza and the Plaza Mayor were the scenes for the storytelling, poetry readings and performances.
Almeria provincial government president Javier A. Garcia was among the dignitaries in Vera for the occasion. In his speech he recognised that the Vera municipal archive is “one of the most important in Andalucia, and thanks to this it has been possible to rescue the memory of what happened on November 9 1518.”
The Diputacion president also referred to “all the generations of Vera people who have been able to raise such a booming town for the province, as Vera is, a leader in the Almeria Levante region creation of wealth and employment, and of which all Almerians feel proud.”
He ended by pledging his administration’s continued support “for the growth and development of the municipality.”
Vera Mayor Jose Carmelo Jorge commented that the earthquake was the “undoubted starting point for building the lovely and advanced town which Vera has become today, being one of the main towns in the Levante region thanks to the work and effort of all Vera people.”
The official acts concluded with a floral offering and a minute’s silence in front of the Town Hall in memory of the victims, the only sound Octavio Santos and Fran Martinez on the cello and keyboard playing ‘El canto de los pajaros’.
Tenor Enrique Parra then performed Ingemisco from Verdi’s requiem.
The most moving part of the commemorations however was the torch-lit procession by about 100 local residents to what is today known as the Espiritu Santo hill where the medieval town of Bayra once stood. They went all the way up to the Bayra museum esplanade where the local actor who took on the character Iñigo de Guevara, the town mayor in 1518, read out a manifesto and the light of the image of the Sacred Heart which today stands on top of the hill was turned off for a minute’s silence at exactly 11pm, the hour when according to accounts from the times the earthquake struck.
The 1518 earthquake was of such magnitude that the fortification which had stood at the top of the Espiritu Santo hill came crashing down on the houses and walls of Bayra. Those who survived went on to build the new town of Vera.