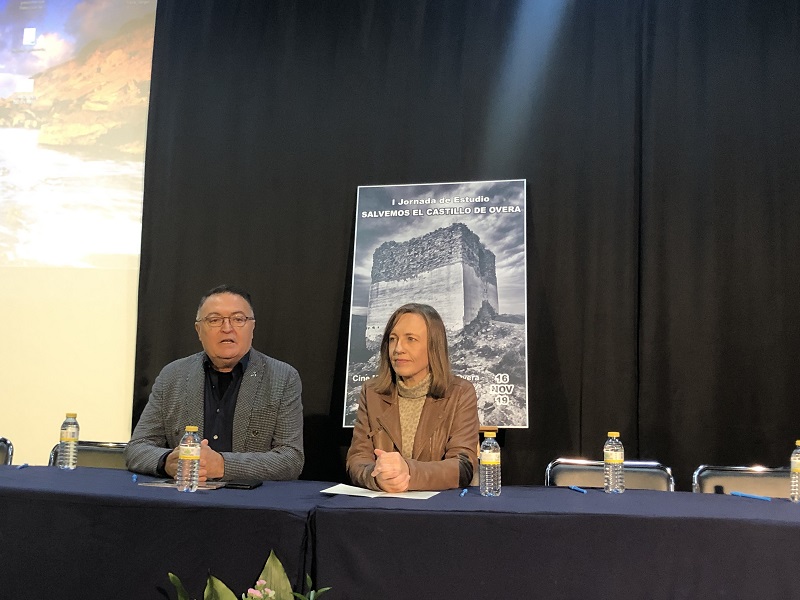 JOINT FORCE: The Mayor said the meeting was aimed at looking at how different administrations could work together to make the restoration project a reality. CREDIT: Ayuntamiento de Huercal-Overa

PLANS are afoot to try and renovate Overa castle as a key part of Huercal-Overa’s local history in Spain.
The municipality last week hosted the first ‘Salvemos el Castillo de Overa’ (Save Overa Castle) gathering of experts to look at how to make the project a reality.
Organised by the Overa Viva platform, the meeting at the municipal cinema included members of the local council, historians and archaeologists, among them medieval Almeria specialist and Vera museum director Domingo Ortiz and Lorca museum director Andres Martinez.
In her address to the event participants Huercal-Overa Mayor Francisca Lourdes Fernandez told them “it is a privilege that experts from the municipality and beyond have come here today so that with a multi-disciplinary focus we can find out about part of our heritage and establish the necessary bases enabling the different administrations to work together to be able to restore it.”
The Mayor said there was a responsibility to make people aware about local heritage and to look after it for future generations.
Overa Viva co-director Juan Pardo described Overa castle as “a great treasure” which had been abandoned and which merited being renovated in order to turn it into a provincial reference point.
The structure was, Pardo said, “considered the key of the Almanzora, explaining its role in important historical events, including the castle conquest by Lorca captain Morata and its subsequent recapture by Moorish forces and the possible visit by the Catholic Monarchs on their journey to the Real in Vera to receive the keys to the towns of the Lower Almanzora in 1482.
Overa castle is more than 800 years old. It was built to keep a watch on and control what was the major Lower Almanzora crossroads, with tracks connecting the coast and the inland mountain mines and the road which united Andalucia with the eastern Mediterranean.
It was also an important refuge for the local population, and became a frontier post between the Arab and Christian worlds in the second half of the medieval age.