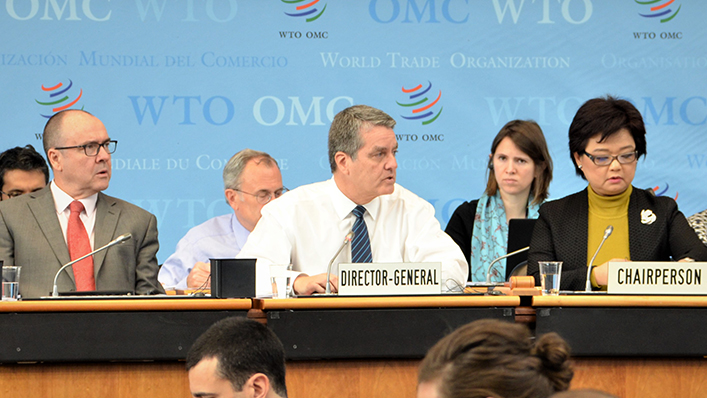 Shutdown of court will leave UK at mercy of EU

Donald Trump has engineered the shutdown of the World Trade Organization’s top court. The UK will become an independent member if it leaves the EU and is at risk of being left at the mercy of the EU in its trading relationship in a year’s time. The CBI has said the shutdown of the WTO court will leave global trade “Like a football match without referee” and the UK’s lack of free trade agreements post-Brexit would leave the country’s economy vulnerable. Donald Trumps refusal to approve the appointment or reappointment of any judges on the appellate body has left it unable to function. “Relying on WTO rules doesn’t look so great this morning,” one EU official said.

After midnight on Wednesday, the WTO court will no longer adjudicate on trade disputes, putting the world at risk of a free trade free-for-all in which the largest blocs have greater freedom to use their economic weight to do as they wish. Countries or trade blocs who have not negotiated bilateral trade deals containing dispute resolution mechanisms will have no independent means for resolving their problems with each other.

If the UK leaves the EU on 31 January, Boris Johnson has said he will not extend an 11-month transition period in which he wants to negotiate a comprehensive free trade deal with the bloc. Any failure to complete those complex talks by the end of that period would result in the UK trading with the EU entirely on WTO terms, including the imposition of tariffs and quotas, from 1 January 2021.

Under the terms of the transition period, the UK is to remain in the single market and EU customs union temporarily. The problem is that should the UK, once outside of those structures, come to believe that the EU is imposing vexatious barriers to trade, there would be no recourse to legal redress for the British government. The WTO (World Trade Organisation) was established in 1995 to deal with trade disputes and the WTO appellate body as it is called, deals with the most extreme trade disputes. Phil Hogan, the European commissioner for trade, who will oversee the EU’s negotiations with the UK, said: “With the appellate body removed from the equation, we have lost an enforceable dispute settlement system that has been an independent guarantor – for large and small economies alike – that the WTO’s rules are applied impartially.”