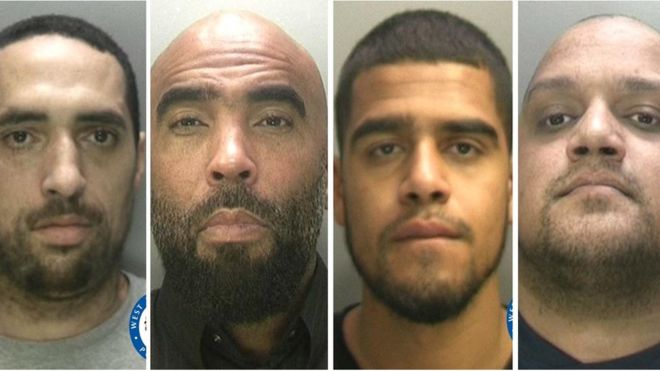 Four Birmingham men involved in a violent feud which saw rivals shot, kidnapped and stabbed on city streets have been jailed.

The quartet have been handed jail sentences totalling 100 years, in a major success in the fight against organised crime, to some local people they were known as ‘The Peaky Blinders‘. However, the similarity with the Netflix series ends there, these men were extremely violent and organised, the streets of Birmingham will be safer with then locked away…

Rival factions fought in the Balsall Heath area of the city in what detectives have described as a ‘mini war’, which is believed to have been linked to the drugs trade. Detectives began linking a series of violent incidents, which caused widespread concern in the area, and a major operation was launched to target those involved.

Violence that police believe was linked to the trouble included the robbery of a man on George Street, a gun being fired from one car at another on Roshven Road, and a frenzied machete attack on Jacob Emanuel.

A cache of weapons was seized from properties linked to the investigation.

On 30 April this year, brothers Jacob and Nathan Emanuel confronted a rival at a flat in Strentham Court on Edgbaston Road in the Balsall Heath area of the city. They threatened him, beat him, and fired a shotgun close to his head, leaving him with a perforated eardrum and a number of other injuries.

The victim fled, but a friend who he’d arranged to meet at the flat, arrived minutes later. The brothers followed the second victim into the flat, demanded money from him before Nathan blasted him in the face with the same shotgun.

The brothers fled the scene leaving the victim for dead. He was only saved thanks to first aid from firearms officers and medics, but has been left disfigured, blind, partially deaf and in need of multiple operations to reconstruct his face.

Tensions boiled over again two days later when Mohammed Luqman dragged a victim off the street and into a vehicle driven by a man wearing a balaclava. Luqman’s father had been attacked only an hour earlier, and he believed the victim was responsible, telling him he was ‘dead’, and ‘not going home’.

On Caroline Road, the kidnapped man was threatened by Mohammed Osman who said: “I’m a murder man”, and stabbed him in the back with a silver butcher’s knife as he tried to run away.

Others watching shouted: “Go for his chest, go for his neck”.

Four men were either convicted or found guilty following a trial which started in October and ended last week (11 December). They were jailed at Birmingham Crown Court today (19 December).

Det Insp Rich Marsh, who led the investigation, said: “We believe that this was a drugs dispute that triggered what was essentially a mini-war on the streets of Balsall Heath.

“It caused a huge amount of concern in the community – firearms were being openly used by people involved in that violence, with no regard for the consequences.

“We took decisive action to arrest the key offenders in this series of events, and were able to build a compelling case against them which has resulted in the lengthy sentences handed down today.

“Gun crime is down in Birmingham, and there’s no doubt that our efforts to disrupt those involved in this violence have helped achieve that.