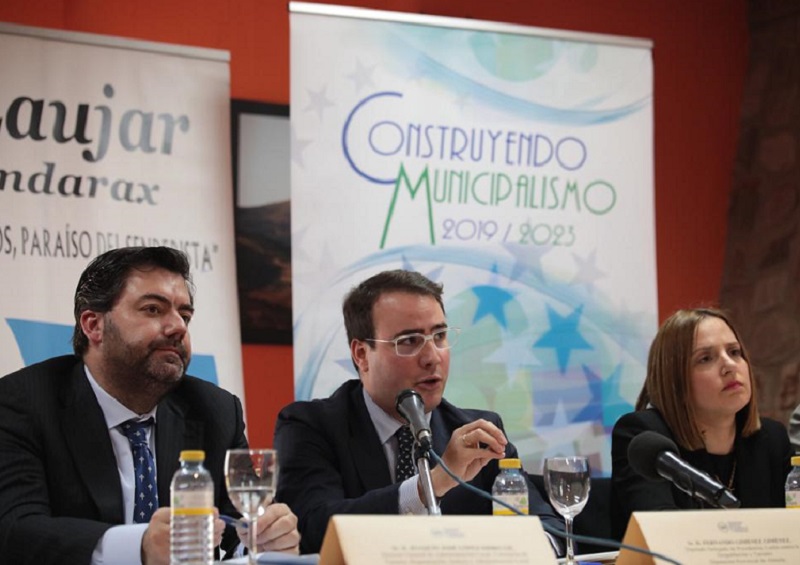 ACTION: The provincial Fight against Depopulation deputy pointed to specific measures like installing fibre optics and cashpoints in small municipalities and plans to help the self-employed. CREDIT: Diputacion de Almeria

LAUJAR de Andarax has this week hosted an event to analyse and debate the consequences of depopulation and to explore action which administrations can take to address the problem.
The FAMP Andalucia Federation of Municipalities and Provinces organised the ‘Afrontando los retos de la despoblacion: fortalezas y debilidades’ (Confronting the challenges of depopulation: strengths and weaknesses) forum with the aim of pooling ideas to identify solutions to the rural exodus problem.
Diputacion de Almeria Fight against Depopulation and Tourism deputy Fernando Gimenez took part in the roundtable discussions.
He maintained that “proof” of the provincial administration’s “commitment on the demographic challenge” was the creation of the Fight against Depopulation section as part of the Presidency department “in order that all measures carried out are across the board from all areas of the institution.”
The deputy also affirmed that the administration’s budget for this year very much takes into consideration the depopulation problem following dialogue with mayors, local authorities and the opposition parties.
Among the specific measures the deputy said the provincial administration is taking are a study to analyse the factors behind the phenomenon, and which he affirmed “will give us the keys to changing this situation.”
He also referred to the administration’s plan for the self-employed designed to help entrepreneurs operate in municipalities with less than 3,000 inhabitants, the plan to introduce cashpoints in municipalities where there are none, the installation of fibre optics in the smallest localities and investments in works to smarten up the villages with the lowest populations.
Gimenez gave the example of the ‘Sabores Almeria’ brand to promote inland tourism as a Diputacion initiative which he said had helped increase visitor numbers in places like Macael, Laroya and Padules.
Laujar de Andarax Almudena Morales commented that is was an honour for the municipality to host the FAMP event and which made it the “epicentre of the fight against depopulation, one of the most important challenges which we face in rural and inland zones.”
She added, “We need to confront it with the help of the Diputacion and of the rest of the administrations to design a road map which will help us to overcome this challenge.”
The IAAP Andalucia Public Administrations Institute worked with FAMP on organising the forum, on which the European Commission, the Spanish national government, the Junta de Andalucia, the Diputacion de Almeria and the Spanish Federation of Municipalities and Provinces also collaborated.
Representatives from institutions across Andalucia attended. Also taking part were representatives from other regions of Spain, including Aragon and Extremadura, from the European Commission, from the Andalucia business community, academics and the other