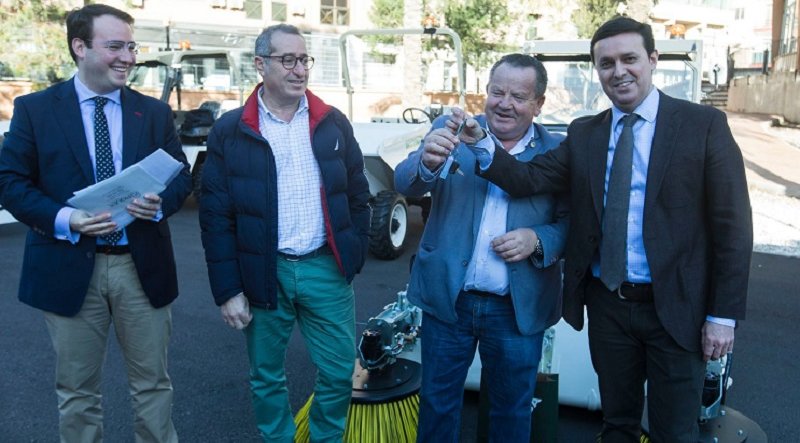 ALL YOURS! The Diputacion President did the honours of handing over the keys to the municipal mayors. CREDIT: Diputacion de Almeria Facebook @diputaciondealmeria

SMALL towns around Almeria are set to look spick and span thanks to a set of shiny new cleaning and maintenance vehicles provided by the provincial government.
The Diputacion de Almeria has today Tuesday given 10 dumpers and 11 sweepers to 21 municipalities with less than 2,000 inhabitants under its 2019 Economic Assistance Plan, with a €500,000 investment to cover the basic cleaning and minor works needs of small localities.
Diputacion President Javier A. Garcia, accompanied by Presidency deputy Fernando Giminez did the honours of handing the keys and documentation to the mayors of the 21 municipalities at an act staged in the Moises Ruiz pavillion in Almeria city.
“The machinery we are handing over today will allow you as local councils to offer a better public service to your residents”, Garcia told the council heads.
The Diputacion President maintained the initiative was part of his administration’s policy of “assisting the municipalities which are the smallest and which have the least resources in order to equalize opportunities between Almeria, wherever they live.”
He also claimed that this was an example of a project which “contributes in an effective way to fighting depopulation, as it provides services to inland municipalities so that residents have the same services as in the capital and can stay in the municipality in which they were born.”
Olula de Castro, Alcontar, Benitagla, Alcudia de Monteagud, Almocita, Bayarque, Turrillas, Tahal, Paterna del Rio, Lucainena de las Torres and Fines are the councils which are the new owners of the sweepers. The dumpers have gone to  Bacares, Fuente Victoria, Bedar, Maria, Bentarique, Chercos, Senes, Ragol, Urracal and Nacimiento.