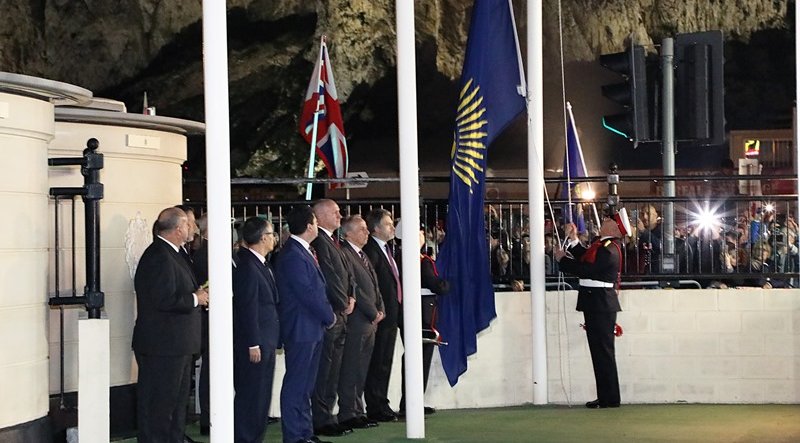 The Commonwealth flag has now replaced the EU flag at the border Credit: Government of Gibraltar

THE next 11 months will be of extreme importance to the people of Gibraltar who have managed to survive as a tiny enclave on the Iberian Peninsula whilst embracing the UK as their parent.

For more than 300 years it has had direct links with Britain and during that time it has seen many good but equally many difficult times.

The Spanish government has claimed that it is an anomaly and should be part of Spain both politically as well as geographically and the fact is that despite English being the official language of the Rock, most family groups revert to Spanish as their main language at home.

What is clear however is that regardless of linguistic preferences, the people of Gibraltar do not consider themselves to be Spanish but in all truth, they aren’t British either.

They are a mixture of different races, religions and opinions which make them Gibraltarians and make no mistake there are still people alive who remember the chaos and carnage of the Civil War which saw families and friends broken apart by the closure of the border and quite significant sums of money lost by those who had investments in Spain.

Britain wasn’t the best of friends during World War II as it was desperate to ship the civilian population away from the Rock and after being thrown out of Morocco, it was only the pleas of the then Governor that allowed the Gibraltarians back onto the Rock before they were shipped off again Jamaica, London and Madeira having to brave seas infested by U Boats and the German navy.

When they were returned, they managed to fight for an element of self-determination and once that was achieved, Franco closed the border as penance for not wanting to cede sovereignty to Spain.

Life went on with Moroccans replacing the Spaniards who worked in Gibraltar and although there was no tourism of any importance, people came and went when it suited them as there is quite a lot of water surrounding Gibraltar and smuggling helped to ease some of the financial pain.

When Spain joined the European Union, it did so on the condition that the border would remain open and with odd crackdowns on extra customs checks movement has generally been relatively smooth.

Gibraltar is an important source of revenue for the Campo de Gibraltar as not only does it employ thousands of Spaniards, it also sees expatriate workers living in Spain and working in Gibraltar who bring income to the area and many Gibraltarians not only have properties in Spain but also do a lot of shopping there.

In much the same way that the Argentine invasion of the Falkland Islands helped to keep Margaret Thatcher in power and ‘united’ the country, so Gibraltar is a useful tool to be red flagged especially by right wing governments and the new Vox party.

When the UK Brexit referendum took place, the Gibraltarians voted overwhelmingly to stay in the EU but that is not to be and last Friday, in a special ceremony at the border, the EU flag was run down the flagpole to the sound of the European Union anthem Ode to Joy and was replaced by the Commonwealth flag.

In a long speech, the following few words from Chief Minister Fabian Picardo encapsulate the feelings of the majority of Gibraltarians as they take on their next big challenge;

“So tonight, let’s not pretend to be happy. Let’s be clear that this is not our choice. But let us also look to the future with great optimism and with the strongest confidence.”