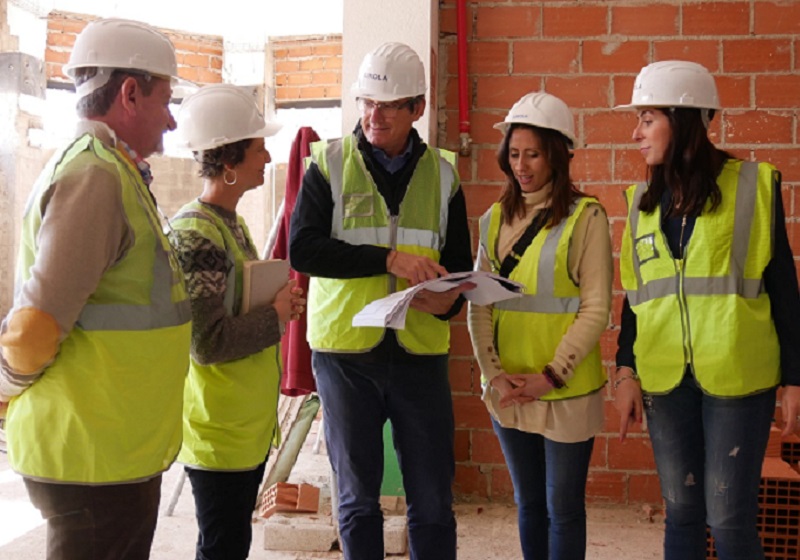 GOOD PROGRESS: The Mayor said it would not be long until the works were finished. CREDIT: Ayuntamiento de Adra

THE project to modernise Adra’s municipal market is moving along nicely, the local council reported.
Adra Mayor Manuel Cortes and members of his government team have been to take a look at the works in person to see how they are progressing.
“The works are advancing at great speed, and it will not be long before we are able to enjoy what is such an important place for the town in general, and for the trade sector in particular”, the Mayor commented.
He said the project is set to transform the building and will “boost the traditional trade and open up to new commercial uses.
“In short, the market will recover its splendor and will once again be a commercial reference point, and that is good for Adra and good for Adra residents.”
Cortes also underlined the point that the works are being carried out “in a way which is compatible with commercial activity, hence it remains open to the public”, adding that municipal taxes for the stalls have been eliminated while the works continued to compensate for any nuisance caused.
The Adra rehabilitation, reform and adaptation project comes under the ‘Adra Ciudad 2020’ initiative, the more than €1.1 million investment financed 80 per cent by the European Regional Development Fund and 20 per cent by the local authority.
Measures so far have included reinforcing the basement and demolition works on the main floor. Works have also been carried out on creating an internal patio, on the library area and on setting out the new locations of the market stalls.
Currently underway on the new market facilities are works for the installation of electricity, plumbing, telecommunications, ventilation, air-conditioning and fire detection, as well as the installation of the bases for the pillars for holding up a metal pergola in the southern part, among other measures.
The project is expected to take a maximum of eight months to complete. Once finished, the result will be a market with a “modern look”, which is “open, light-filed and functional”, according to the local authority.
The council also that as well as the existing stalls, there will be gastro-bars and other kinds of businesses, “which will form a commercial hub with its own character.”