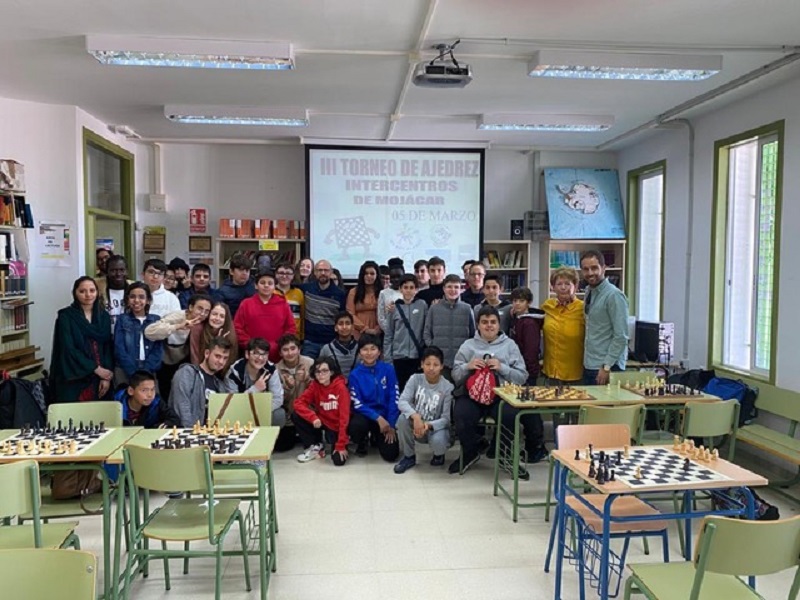 YOUNGSTERS of 20 different nationalities from primary and secondary schools in Turre, Vera, Carboneras, Garrucha and Mojacar competed in the third Inter-School Chess Tournament.
In all 35 players took part in the event staged at Mojacar’s Rey Alabez School to play in the tournament’s two leagues.
This year’s champions were Wentao from IES Mediterraneo and Diego from IES Rey Alabez, both winning a splendid chess set.
An additional set was offered as a raffle prize and there were diplomas for all participants, as well as lunch together with the instructors.
The chess challenge was organised by the ATAL Temporary Classrooms for Linguistic Adjustment. Over five year ago ATAL first started bringing together young chess players, with an emphasis on welcoming immigrant students and promoting intercultural education along with teaching the Spanish language.
Ana Jimenez Lagos is an ATAL teacher at the Mojacar Institute and, the ‘alma mater’ for the team of teachers created across the region’s centres.  She pointed out that the true objective of this tournament was the promotion of coexistence, integration and inclusion.
As Ana explained, at the beginning of the school year many pupils have limited or no Spanish language skills. Without friends and the means of communicating outside their home environment and culture, integration is almost impossible for them at first.
Chess helps them to overcome shyness, nerves or any other issue as everyone is equal when playing this strategic game. It is also an ideal way for the local children to meet and make friends with the pupils, while at the same time developing mental skills which help with many subjects, especially mathematics.
The chess tournament marks the end of the classes and the start of poetry sessions with the study of the Alhambra, which they will visit later on a guided tour.