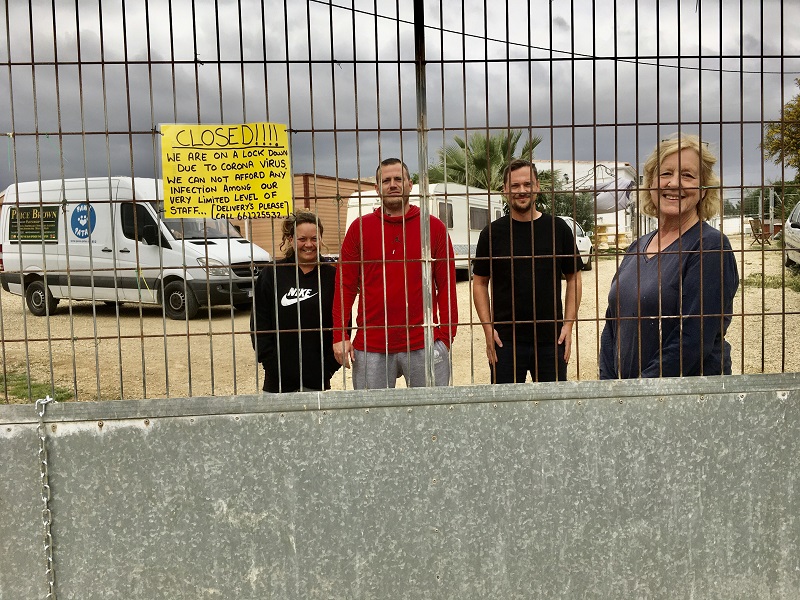 THE coronavirus state of alarm has led to the closure of the PAWS-PATAS animal shelter, and the charity’s four fundraising outlets, prompting a plea for the public to try and help.
With the crisis developing, PAWS-PATAS animal charity volunteer shelter manager Vanessa Maipauw decided on Saturday the best decision was to put the animal shelter into lockdown.
Leaving her husband at home with their four dogs, Vanessa with the total agreement of the charity’s executive committee, along with live-in caretaker James Scamlan and local volunteer Alistair Smith, put padlocks on the gates.
The planned transport of cats and dogs to Holland and the UK on March 26 has been cancelled, meaning volunteers are now left with 37 dogs to care for. There are also 15 puppies and abandoned dogs in the ‘in-take’ section, which long-term volunteer Kerry Clarke oversees.
Kerry travels from Mojacar on a daily basis and is also fostering two puppies.
The cattery, which Sam Spencer manages, has 20 cats, and a handful of faithful volunteers are sharing daily shifts and covering this responsibility.
“People who have to travel to and from the shelter are being provided with an official PAWS-PATAS notification stating that they are working for the animal shelter, and the police are honouring this”, the charity’s Chrissie Cremore told the Euro Weekly News.
“In fact Lucas Mayo at Mojacar Town Hall has stated that if stopped and not allowed to travel, then to get the police to contact him and he would ensure that vet visits, local adoptions and fostering would be safeguarded”, Chrissie explained.
The PAWS-PATAS shelter requires € 9,500 per month. This amount covers vet bills, medicines, food, water, electricity, cleaning materials, and so on. As the four PAWS-PATAS outlets are also closed, “the vital revenue they raise is causing the charity great concern”, Chrissie stressed.
“Therefore, we are asking the public to try and help us. All donations are greatly received and you can send money via PayPal or your bank via our website www.paws-patas.org.
“A plea was put on a Mojacar Facebook forum asking folk to donate the cost of the coffee and tostada that they can’t purchase during the lockdown and by Friday morning people had generously given €561, which of course helps a great deal, but we are still € 9,000 short for the coming weeks.”
Chrissie also reported that they are running low on stocks of dog, puppy, cat and kitten food, as well as cat litter, commenting, “again, if people are able to put a bag or tin in their shopping trolley and leave at the shelter gates this would help immensely. The shelter location is on the website.”
Chrissie made it clear that they are still arranging for adoptions to take place, asking interested people to contact either [email protected] or [email protected]. PAWS-PATAS also desperately needs foster homes, especially for the cats and dogs who could not go on the recent transport as this will help socialise them.
For all other enquiries regarding the shelter visit the PAWS-PATAS website or email [email protected]