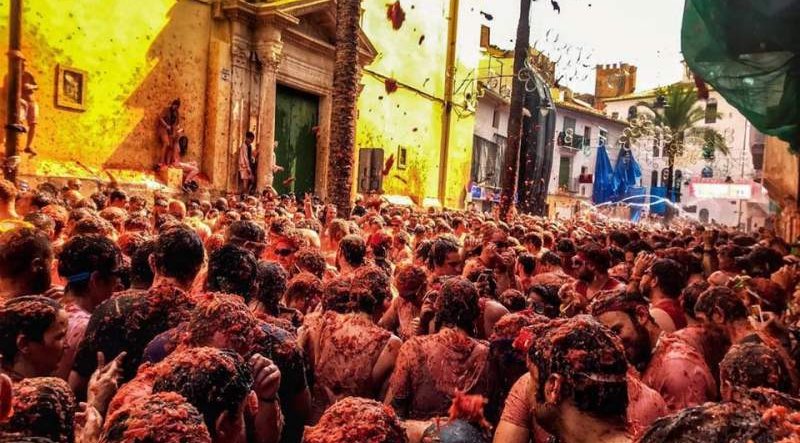 SPAIN’S Costa Blanca tourist industry has been hit a further blow today after a Valencian mayor announced La Tomatina, the world’s biggest and most famous tomato fight in Spain, has been cancelled due to the coronavirus pandemic.

This is the first time since 1957 that the fiesta, which draws 20,000 people every summer to the town of Bunol, Valencia, has not taken place.

On this occasion it was down to political reasons.

La Tomatina attracts competitors and spectators from all over the world who pelt ripe tomatoes at each other, and is renowned as one of the biggest street fiestas in Spain.

The 75th fiesta was due to take place in August, but Bunol Council today confirmed it has been cancelled.

Mayor Juncal Carrascosa said they were adhering to their responsibilities during the health crisis, stressing “there is no escaping how difficult it would be to organise our most international party under these conditions, where the optimal conditions of sanitary control for the participants could not be guaranteed.”

Deputy mayor, María Valles, in charge of the fiesta organisation, brought up the issue of cancelling La Tomatina with the local council.

It was unanimously agreed that this was the best course of action in light of the pandemic and an announcement was expected to be made on Monday, April 27.

But it was leaked and so a formal announcement was made.

However, determined to keep spirits high, La Tomatina de Buñol (Oficial) Facebook is encouraging everybody to make the event bigger and better next year.
https://www.facebook.com/LaTomatinaOficial/photos/a.292079497565949/2842553572518516/?type=3&theater