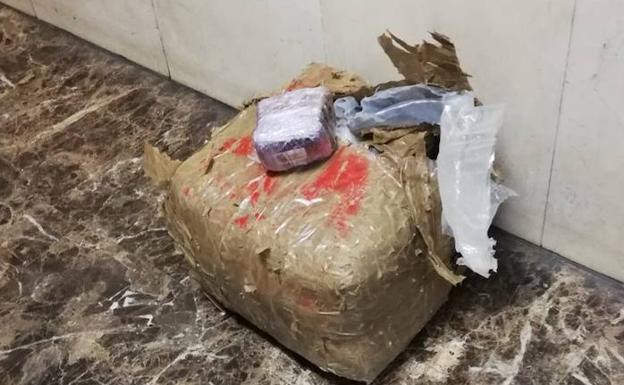 The man saw a suspicious looking cardboard box in Baños del Carmen and walked to take a look thinking it could contain clothing of some sort.

FOR most children, going outside again after a month and a half of quarantine, felt a bit like a holiday. Albeit a strange one full of rules and prohibitions (don’t touch this, don’t touch that, don’t take off your mask, don’t touch your eyes etc).

However, for one minor in particular, her first outing since the beginning of quarantine, on Sunday, turned into a real adventure with even the police showing up to the scene.

When walking together along the beach of the Baños del Carmen in the city of Malaga, the father and daughter stumbled across a bundle of almost 18 kilos of hashish.

It was at around 1.00pm when the Local Police received a call from a citizen, the father, who claimed to have located this stash of drugs on his walk with his daughter and a nearby patrol car was called to the scene.

Upon arriving to the Baños del Carmen, officers encountered a 47-year-old man who was with his young daughter. The citizen, a resident of the eastern part of the city, explained to the Local Police that he had gone for a walk with his daughter, whilst abiding to the restrictions of distances, time and security measures imposed by the quarantine.

When they were walking on the beach, they could see, in the rocky area near the spa, a large cardboard box. It was wet, evidencing that the sea had brought it back to shore. As the man explained, he thought it was clothing, so he went to open it to check what it contained.

The citizen explained that, when he looked inside the box, he observed that there were a series of small packages. He deduced this was some kind of drug by the way it was packaged, which is why he immediately called the police to alert the discovery and allowed the officers to take charge of the situation.

Upon hearing this, officials inspected the interior of the packages and found that they contained hashish. When police confirmed that he had indeed found a cache of drugs, he was quick to state that he had nothing to do with it and that it was the first time he had seen that box.

Local Police officers intervened the package and transferred it to the Provincial Police Station, where the drug was weighed. Specifically, there were 17.8 kilos of hashish, as confirmed by the different sources consulted. They also conducted a quick search around the area in case they found any other package but they found nothing.