Pro and anti-monarchists turn out for Royal visit in Mallorca 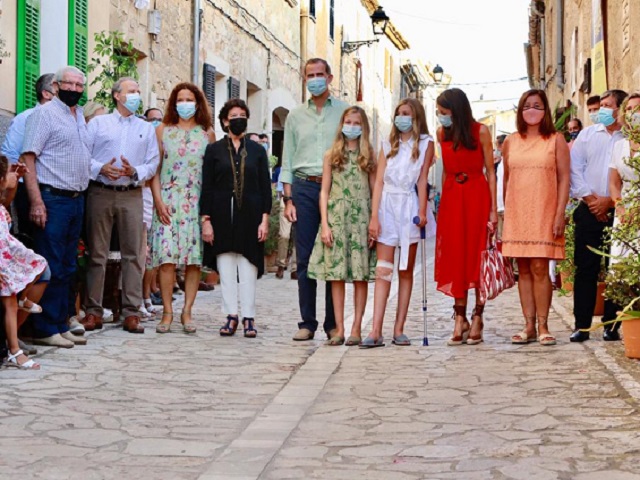 OFFICIAL DUTIES: The Royal four visited the house where the 18th century friar credited with taking Catholicism to the US West Coast was born CREDIT: Govern Illes Balears Noticias

BOTH pro and anti-monarchists turned out for the Royal Family’s visit to the Mallorca town of Petra on Monday evening.
As the Royal party visited the house where the 18th century friar credited with taking Catholicism to the US West Coast, Junipero Serra, was born, there were cheers and calls of “Long live the King” and “Long live Queen Letizia” from the gathering organised by Foro Baleares in defence of the Crown.
Meanwhile the pro-republican group Arruix Borbons was whistling and shouting out demands to free Catalan prisoners and slogans like “the monarchy is rubbish.”
King Felipe and the Queen were joined on their tour of the Juniper Serra museum by their daughters Princess Leonor and Infanta Sofia, who was walking with a crutch after falling a day earlier.
Accompanying the royals were the heads of the Balearic Island and Mallorca governments, Francina Armengol and Catalina Cladera, and Government Subdelegate Aina Calvo, among other dignitaries.
The visit was seen as an act of support for the memory of the friar, who was made a saint by Pope John Paul II in 1988.
Native Americans however say the Mallorca missionary oversaw the brutalisation and forced labour of native peoples, and statues of Serra in several US cities have been targets of attacks in recent months.
In June the word “racist” was daubed on the pedestal of the statue of the friar in Palma.


The morning after the Petra visit the Royal four were back on official duty, this time dropping into the Naüm socio-educational centre in Son Roca on the outskirts of Palma.
During their visit they learned about the centre’s work with children, adolescents and their families over the last two decades in one of the most disadvantaged districts of Mallorca.
The also chatted to some of the youngsters the project assists.

We are a consultancy firm that provides professional services in resident/non-resident taxes,
accountancy,  staff requirements and legal assistance for businesses and private persons.

Our team of multi-lingual professionals provides comprehensive consulting services in the language of your choice;  English,  Spanish,  German,  Dutch or  Russian.