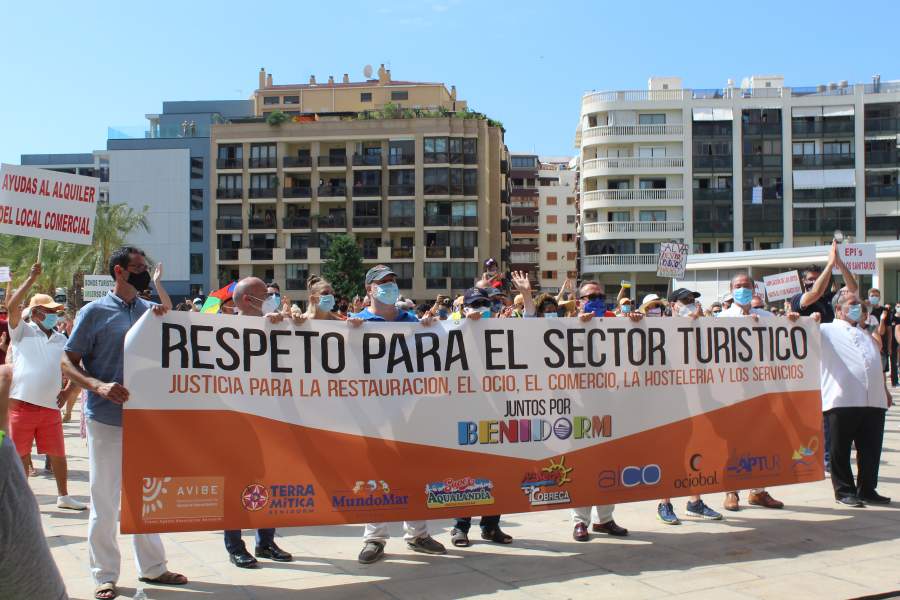 HUNDREDS of expat and Spanish business owners, traders and residents hit the streets of Benidorm this morning (Sunday, August 23) to take part in a peaceful demonstration against recent regulations imposed by the Spanish government.

Nightclubs, discotheques and similar venues have been shut down as part of the new regulations in a bid to stop further spikes in coronavirus infections – a move which it is feared could see businesses closed for good.

The crowds gathered at the Hotel Climbel on the Levante promenade at 11am, and while observing social distance measures, wearing masks and having sanitised their hands before joining the throngs, protestors made their way to the town hall.

Along the route, beachgoers and other members of the public showed their support with sporadic rounds of applause.

The peaceful demonstration was prompted by the Spanish government’s “continual absurdities and lack of organisation or planning during the health crisis,” said Benidorm’s independent shopkeepers’ association, AICO.
Past and current policies are penalising business people, shopkeepers and the self-employed while burdening them with debts, the association added.
Together with ABRECA, representing Benidorm’s bars, restaurants and cafeterias, and OCIOBAL, an association of disco, pub and night-time venue owners, AICO called on the local population to join today’s demonstration.
And they did, with representatives from all nationalities present, armed with banners calling for IVA (VAT) to be reduced and ERTE to be extended, among other requests.


The three associations argue that holiday destinations with favourable statistics should not be subjected to the most recent government measures and intend to start legal proceedings asking for the suspension of the latest decree, AICO explained.

Euro Weekly News spoke to demonstrators as they made their way to the town hall where association representatives addressed the crowds.

“Benidorm is safe and clean. This is not a a decision to protect health, it’s a political one,” said one of the resort’s tribute acts, Simon Meatloaf, who has been out of work for months.
Fellow entertainer Jonny Hellraizer said his last gig was on March 13, and he has had no work or government support since.
“I have not been able to work for five months and have received no money or help from the government.”
Another said: “There is so much confusion and the goal posts just keep changing with little or no notice. This is ruining the resort and its businesses.
“The government must do something before Benidorm is destroyed.”