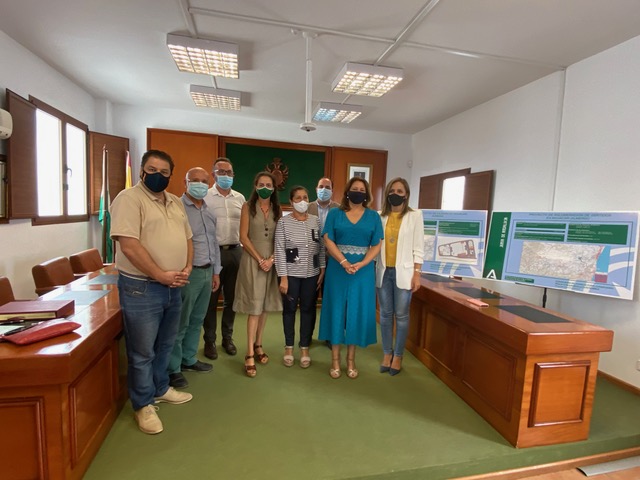 AT LAST: The Mojacar Mayor made the point the plant project follows 13 years of lobbying CREDIT: Ayuntamiento de Mojacar

THE Andalucia government has presented the long-awaited project for the  Mojacar waste treatment plant, which will also serve Bedar, Los Gallardos and Turre.
The regional Agriculture, Livestock, Fisheries and Sustainable Development minister Carmen Crespo Diaz chaired this week’s presentation of the details at Mojacar Town Hall.
Mojacar Mayor Rosmari Cano and her administration team were all there, along with Junta de Andalucia territorial government delegate in Almeria Isabel Sanchez Torregrosa, and Agriculture, Fisheries and Sustainable Development delegate Aranzazu Martin Moya, and the General Director for Water Infrastructures Segio Arjona.
Also present were the mayors and municipal representatives from the other localities involved.
Rosmari Cano described the day as an historic event for Mojacar following 13 years of lobbying for the project.
She thanked the Junta for making possible the project, which will be put out to tender in October.
Carmen Crespo took the opportunity to thank the area for bringing the plans closer to a reality.
She said she views it as an excellent initiative, both from an environmental point of view and in terms of future development.
She explained more than €23 million will be invested from the “Andalucia en Marcha” scheme, one of the largest investments in the area and the second most important in Almeria.
Crespo also highlighted the Junta’s drive to improve purification treatments throughout Andalucia, and especially in Almeria, with a vision for the future incorporating cutting-edge technology.
The new plant will be built at the same location as the existing one, although it will benefit from the most advanced systems designed to treat 25,000 cubic metres per day for a growing population of up to 54,000.
Estimates are that the construction is of the plant will take 18 months, followed by an additional six-month start-up period.
We hope you enjoyed this article “Andalucia government presents project for long-awaited Mojacar waste treatment plant”.
Euro Weekly News is delighted to continue be able to bring you a range of News that doesn’t cost you anything but your internet connection. Whether it’s Local Spanish News or International Entertainment News, we’ve got you covered!
For more Local Spanish News from Almeria, head over the page on to the Euro Weekly News website.
Euro Weekly News, the people’s paper, we lead others follow!