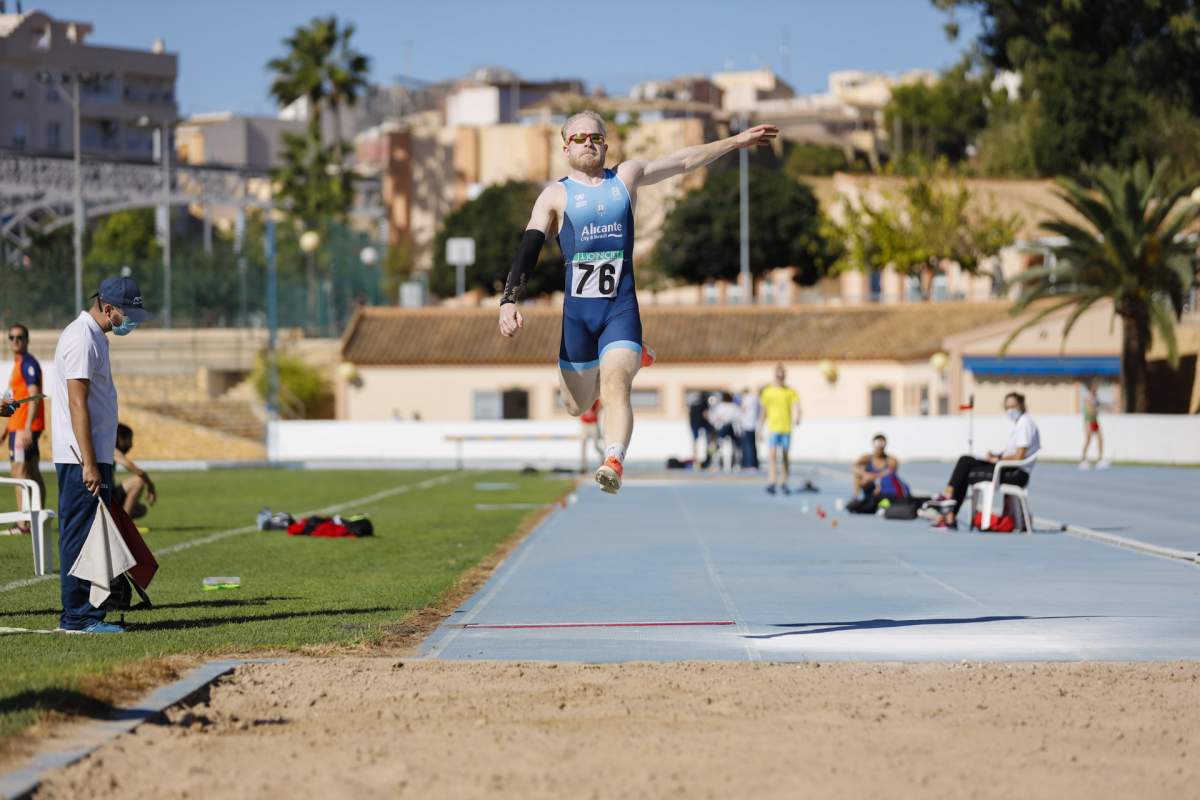 Iván Jose Cano has beaten his own record on the Costa Blanca and has been confirmed for the Tokyo Paralympics 2021.
THE best blind and visually impaired athletes in Spain met at the Polideportivo Municipal de Alfaz del Pi at the weekend, where trials, organised by the Spanish Federation of Sports for the Blind (FEDC), were held.
Among all of the athletes, long jumper Iván Cano from Alicante stood out.
He surpassed his personal best of 7.04 meters on the tracks, which assures him a place in the Spanish team at the next Paralympic Games in Tokyo.
Alfaz’s Councillor Sports, Oscar Perez, said he was “pleased with the development of the Athletics Championship”, and the “good results obtained in general by athletes”.
“In particular the record broken on the tracks by Ivan,” he said, reiterating the effort of all the members of the FEDC, whom he thanks for having chosen Alfaz del Pi “as the best place to hold the events”.
Ivan, who is the current World Cup bronze medalist, was accompanied in the pit by the World Cup participants Xavier Porras and Martín Parejo.
In the women’s category, Sara Martínez and Txell Playá also impressed.
The speed trials saw internationals Lia Beel and Itxaso Munguira compete, while in the long-distance trials Maria del Carmen Paredes stood out.
“The event was carried out following the protocols marked by the current legislation, and the instructions of the Consejo Superior de Deportes, in order to offer the appropriate sanitary safety measures to all the participants,” assured Perez.
Athletics is one of the most widespread sports among the visually impaired, and is practiced in international competitions in more than 70 countries.
All competitions are organized according to IBSA’s regulations and the rules of the International Athletics Federation (IAAF) are applied.
The 2020 Paralympics were postponed due to the coronavirus pandemic, and are now scheduled for August 24 to September 5.

The Tokyo Organising Committee of the Paralympic and Olympic Games (Tokyo 2020) announced today, Monday, September 28, an outline of the Tokyo 2020 Paralympic Torch Relay planned for 2021.

“It will aim to create a festive atmosphere in the run-up to the Paralympic Games while maintaining the momentum generated by the Olympic Games,” said the committee in a statement.

Thank you reading this article “Iván Cano beats his own record on the Costa Blanca and sets his sights on the Tokyo Paralympics 2021”.
Euro Weekly News is delighted to continue be able to bring you a range of News that doesn’t cost you anything but your internet connection. Whether it’s Local Spanish News or International Entertainment News, we’ve got you covered!