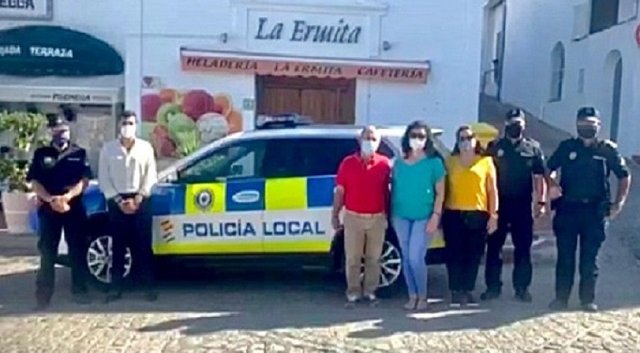 FULLY EQUIPPED: The new vehicle is kitted out to serve a variety of functions CREDIT: Ayuntamiento de Mojacar

MOJACAR’S Local Police force boasts a brand new customised patrol car as part of its fleet.
The council spent €39,000 on the automatic, all-terrain patrol vehicle, which is specifically designed for the transport of detainees.
With a dividing screen made of high-strength polycarbonate to resist strong impacts, the vehicle has full visibility of the detention area, which has its own lighting, electric fan ventilation, floor drainage and seats with electronic belts.
It is however fully equipped for all service functions, with high-intensity, low-consumption, advanced optical lights, exterior lettering with special high visibility paint, fire extinguishers and a full first-aid kit, as well as a large number of useful accessories.
The vehicle is already operating as part of the fleet, which is made up of six cars, additional camouflage vehicles and a number of off-road and urban motorbikes.
A drone has also been purchased to support control and security tasks.
“The 26 Local Police officers based in Mojacar do an excellent job throughout the year”, the council stressed.
The local authority pointed out officers have a wide range of responsibilities, in addition to ensuring the safety of residents and visitors.
They have taken on general traffic duties in the locality. This can cover any road safety matter, from breathalyser controls to taking statements, and following the campaigns led by the General Security Directorate.
Two other important ongoing projects for the force are the monitoring of school absenteeism and training courses in the fight against gender abuse.
The latter earned Mojacar Local Police the Andalucia government’s Menina Award for their pioneering work in the region, providing protection to victims suffering from this serious social problem.
Mojacar’s Security councillor María Luisa Perez said the acquisition of this new vehicle is all part of a continuous updating and modernization plan, not just for the vehicle fleet, but also for the equipment used and in terms of officer training courses.
We hope you enjoyed this article “Mojacar’s Local Police force boasts brand new customised patrol car”.
Euro Weekly News is delighted to continue be able to bring you a range of News that doesn’t cost you anything but your internet connection. Whether it’s Local Spanish News or International Entertainment News, we’ve got you covered!
For more Local Spanish News from Almeria, head over the page on to the Euro Weekly News website.
Euro Weekly News, the people’s paper, we lead others follow!