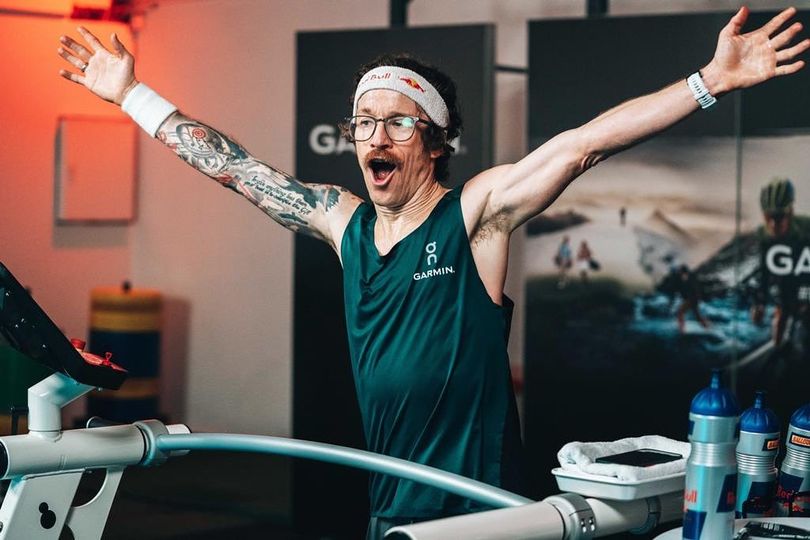 THE 39-year-old beat the previous record by six minutes, completing the distance in 6:26:08 on January 30.

It’s not the first time Neuschwander has made headlines. Last March he broke the 50k treadmill world record, with a time of 2:57:25.

But by the end of 2020, this had been bettered by runners including Matthias Kyburz and Tyler Andrews.

Neuschwander told Runner’s World he always trains on the treadmill in the winter as he doesn’t like to “run every day in the cold temperatures and slip”.

The athlete said he trained for 12 weeks in advance and kept his mileage relatively low, notching up between 60 to 80km a week.

He complimented that with Zwift cycling and backcountry skiing.

The run that gave him the most confidence for his record attempt was a 50K test run he did, which he finished six minutes faster than his world record time.

In his latest accomplishment, Neuschwander’s treadmill speed was around 15.6 km/hr throughout the entire run but admits his toughest stretch came between 75 and 85K when he suffered cramps and was forced to cut his speed 15.1 km/hr.

For the last 10K, Neuschwander said he drank two Red Bulls mixed with water and sped up to 17 km/hr.

“For me, treadmill running isn’t really hard,. The main thing is to have fresh air. This is hard, but if you have a lot of fresh air, your heart rate goes down.

“In the gym, we had a big door open and it was nearly like outdoor running but in one place,” he told Running News.

Neuschwander now plans to continue training for the 100K German Championships in the fall.