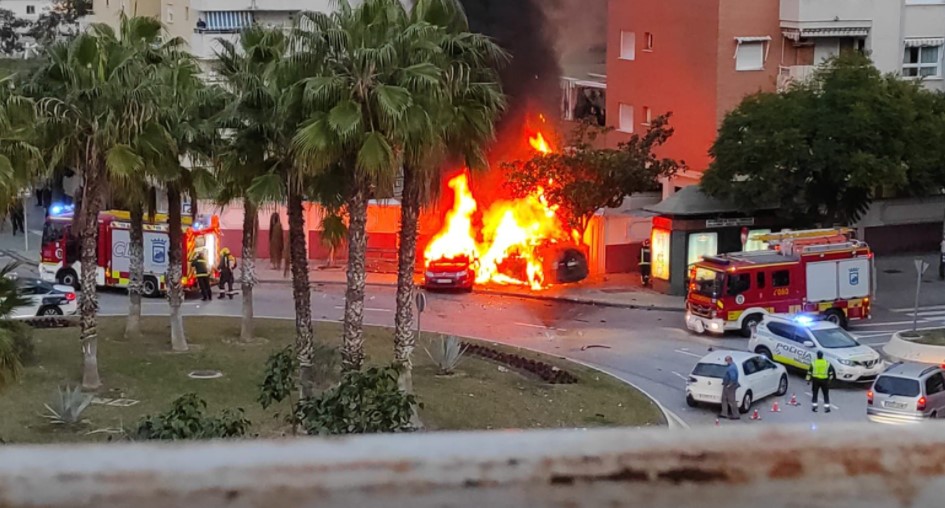 The Crash: A Local Police officer was walking with his family when the smash took place. Image: Facebook/Eddysanchez

A POLICE officer who was at the scene when a car crashed over a roundabout in Malaga, crushing another vehicle and injuring three people, has described he heard “a great roar.”

Local Police officer Manuel Ortuño was off-duty when he witnessed the crash and helped with the rescue mission.
He said he was walking with his family when he heard “a great roar,” and turned to see a car “flying” before it landed on another vehicle parked next to a kiosk.
The police officer, who works in Teba and has passed exams to join Malaga’s municipal police next month, said he ran towards the two vehicles, which were on fire.
He explained: “There was a boy asking for help because his girlfriend was under the car, he kept asking for help.”
The police officer explained he and the boyfriend tried to get the girl out from under the car but the fire was growing and the girl was not moving. He said: “She had a pulse but she was unconscious.”
Officers from the Guardia Civil then joined the pair and together they were able to remove the girl from the wreckage.
Ortuño said: “The boy was very upset, shocked, he kept calling for an ambulance.”
The police officer then began to try to put out the fire, explaining, “with the extinguishers in the patrol car we tried to put out the fire, but there was no way.”
He later offered to help direct traffic around the accident since it was causing large tailbacks, before finally letting his colleagues carry on.  He said, “I couldn’t do anything more.”
The accident took place at around 6.45pm after members of the Guardia Civil allegedly tried to stop a car on the motorway after noticing smoke coming from the bottom of the vehicle.
According to reports, the driver failed to stop, however, and instead took the Virreina exit before crashing into a roundabout on Avenida Jane Bowles, with its concrete structure creating a ramp which caused the car to fly several metres in the air.
The car then reportedly landed on another vehicle that was stopped on the roundabout as a young woman was getting out, leading to a large fire breaking out.
The 22-year-old woman who was left trapped under the vehicle is thought to have suffered serious injuries and is currently in intensive care at the Malaga Regional Hospital.
The driver of the vehicle reportedly later tested positive for alcohol, according to media reports.