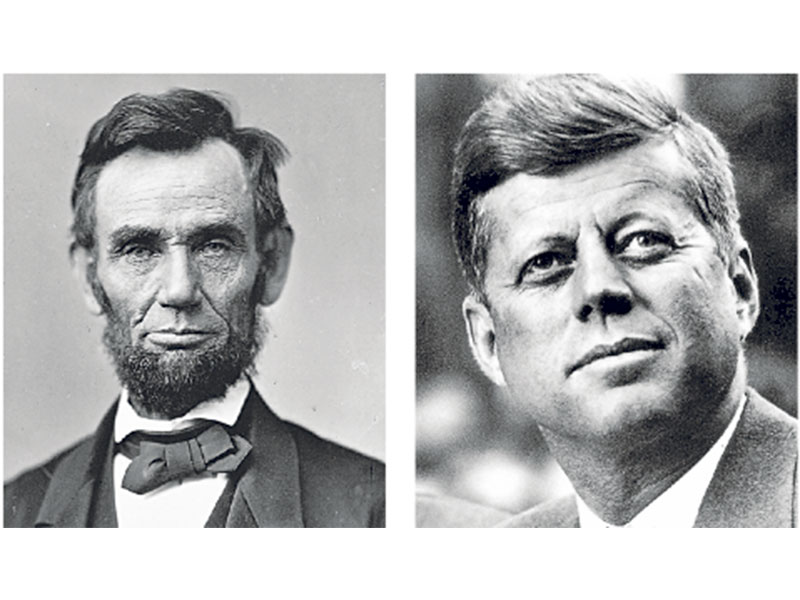 THE coincidental similarities concerning the assassinations of Presidents Lincoln and Kennedy are well documented.

Both assassins, John Wilkes Booth and Lee Harvey Oswald, were known by three names containing 15 letters. They were born in 1839 and 1939 respectively. Booth shot Lincoln in a theatre; Oswald was arrested in a theatre.

Lincoln became President in 1860 and Kennedy in 1960. Both lost a son during their presidency; each was shot in the head in front of his wife. Both Lincoln and Kennedy were committed to human rights and they were both succeeded by a President Johnson: Andrew (born 1808), and Lyndon B (born 1908).

In 2014, a Dutchman, Maarten de Jonge, avoided two spectacular plane disasters. On March 8 he was supposed to be on Malaysia Airlines Flight MH370 (a Boeing). At the last minute he decided to change to a flight departing an hour earlier.

MH370 went missing and not one of the 239 on board has been found. On July 17, just over four months later, he had booked a flight on MH17 (also a Boeing) but changed to a different flight at a cheaper price. MH17 was shot down over Ukraine killing all 298 on board.

In 1968, I had an extraordinary experience in Germany. I was enjoying a beer in a bar in Rastatt, when there was a crash in the street outside. I ventured outside to join several passers-by to ensure that nobody was injured. Luckily the drivers were unharmed – and they were both English. Incredibly, they recognised each other from the same school in England.

Once they had parked their dented cars, I invited them for a coffee. As we chatted about the accident, it turned out that one of them, Adam, had pulled off the motorway for a break driving from Basel to Bremen (where he lived) and Bill was driving from Bremen back home near Basel. They had not seen each other since leaving school in 1953.

Finally, in 1993, my cousin, Ben, met a girl called Astrid while working for two weeks in Singapore. They had dated and vaguely promised to keep in touch as Ben departed for Kuala Lumpur for the weekend on the way back to England. As soon as he arrived at the hotel he realised he wanted to see her again but had not taken any contact details.

Next morning he was just leaving the hotel to explore the city when the receptionist called out that there was a message for him. It was from Astrid who said she would see him in the lobby at nine. She had found out his travel arrangements from her boss and taken an overnight bus to track him down.

They have now been married for 24 years and I am godfather to their elder daughter.