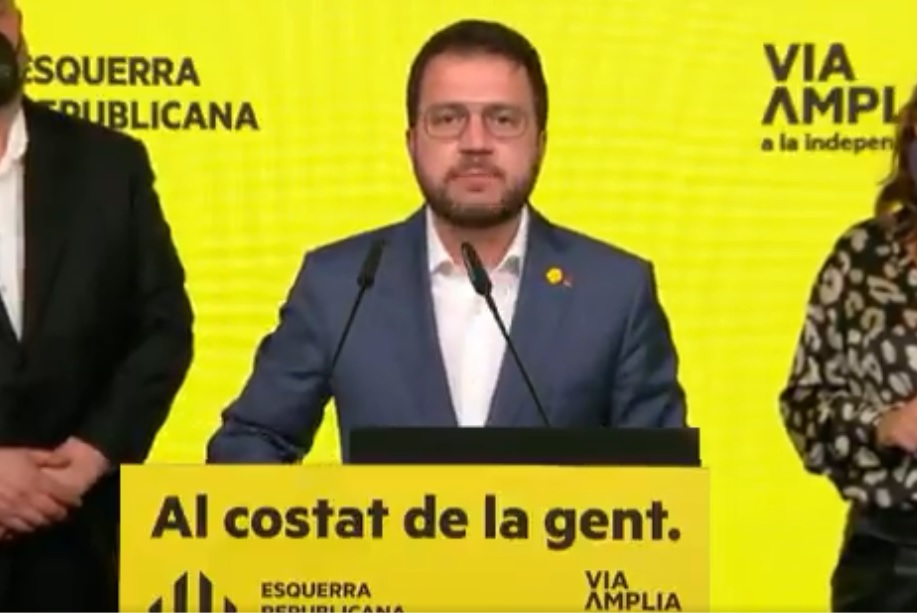 ERC tied for seats in Parliament with PSC. Credit: Twitter

SALVADOR ILLA was expected to be the clear winner of the 14-F elections in Cataluña, but pro-Independence party ERC matched PSC’s number of seats in Parliament.

PSC obtained 33 seats, according to the results published as definitive at 1.56am on February 5, ERC tied at 33, JxCat was close behind with 32.

PSC still led the elections with the highest number of votes, 23 per cent, for Salvador Illa. While ERC was close behind with 21.3 per cent of the votes.

Meanwhile, extreme right party VOX has got into the Catalan parliament and was the fourth most voted party, with 11 seats.

In a major turn-around, Ciudadanos, who won the 2017 elections, lost 30 seats and only got six, and the Party Popular only obtained three.

Participation in the elections was the lowest of the democratic era, with just 53.5 per cent of citizens voting.

Now will be the time for pacts to be negotiated and it appears that ERC main man, Pere Aragones, will be joining forces with other pro-independence parties to make him the President of the Generalitat.

The polling stations closed at 8pm and had already placed former Health Minister Salvador Illa, of the socialist PSC party, as the winner of the elections in Cataluña based on the percentage votes, even if it when it was known that he would have the same or fewer seats than the pro-independence party ERC.

A survey conducted while the elections were being held called it the ‘Illa effect’ due to the fact that Pedro Sanchez had already basically named his former Minister of Health as President of the Generalitat that would allow a PSC-ERC government.

Election day started at 9am with practically all the polling stations set up – 100 per cent were already operational at 10am with strong security measures due to the COVID pandemic.

Gloves, masks, a face shield, gel and EPI suits were provided to all the members and presidents of the tables to wear from 7pm when the Generalitat recommended that people who had tested positive for coronavirus or their close contacts go to vote.