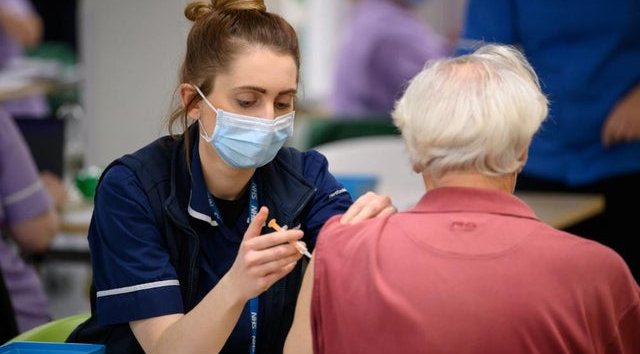 The UK’s vaccination programme against COVID-19 enters a new phase as the National Health Service (NHS) began contacting all over-60s to book their jabs at the nearest vaccination centre or with a general practitioner (GP) or pharmacy on Sunday, Feb. 28.

Almost 2 million people aged 60 to 63 will be invited after over 64s had been covered in the previous phase and letters will start arriving from Monday, March 1, explaining how they can make an appointment for the jab.

They follow more than three in four people aged 65 to 70 taking up the offer of vaccination and nearly 17 million people across England, over a third of the adult population, having received the lifesaving jab.

“Our incredible vaccination programme is accelerating and well over one in three people across the UK have now received their first jab,” said Nadhim Zahawi, UK Vaccine Deployment Minister.

“We are now inviting those aged 60 to 63 to receive their vaccines and I urge everybody to come forward as quickly as possible to protect yourself and others from this terrible virus. Thank you to everyone on the frontline, including NHS vaccinators, GPs, pharmacists and volunteers, whose unrivalled dedication to protecting the most vulnerable should be applauded,” he said.

The latest move comes after the NHS wrote to almost 450,000 people aged 64 along with 600,000 who have recently been asked to shield due to underlying health conditions last week.

The NHS vaccination programme, the biggest in the health service’s history and fastest in Europe, goes from strength to strength. I would urge anyone who has been invited to take up the offer it doesn’t matter when you were invited you can still come forward and protect yourself and others, said Professor Stephen Powis, NHS national medical director.

The push to get as many of the most at-risk people protected means nine in 10 people in the top four priority groups have received a jab. The UK government aims to give a jab to all over-50s and those in specific at-risk groups by April 15 and all other adults are expected to be offered their first dose by July 31.

“Since around four-fifths of 65-69-year-olds have now been vaccinated, we’re rapidly working our way down the generations, with people ages 60+ now able to come forward. As expected vaccine supply increases in March, we’re planning for further acceleration as we head towards Easter,” said Sir Simon Stevens, chief executive of NHS England.

England’s Deputy Chief Medical Officer, Professor Jonathan Van-Tam, added that be reassured the queue is moving really fast and that you’re going to get to the front of the queue because it’s moving fast”.

It follows the updated recommendation by the Joint Committee on Vaccination and Immunisation (JCVI) earlier this week that the rollout will continue to follow an age-based approach. The government has faced some calls to prioritise vaccines based on occupation, such as for teachers who will have to start reopening schools post-lockdown from next month.

“Thankfully, teachers are no more likely to catch COVID than any other member of the population who goes to work, and so trying to come up with a scheme which prioritises one professional group over another would have been complicated to put in place and wouldn’t have done what we asked the JCVI to do… which is to make sure that we minimise the people who die,” said UK Health Secretary Matt Hancock, during a Downing Street press conference on Friday.

Vaccinations are now being administered at more than 1,600 sites across England, including mosques, museums and rugby grounds, with the distribution of centres meaning 98 per cent of the country lives within 10 miles of at least one vaccination service.

Appointments are staggered to allow for social distancing and people are being asked not to turn up early to avoid creating queues. Everyone will receive a health status check and a pre-vaccination assessment before they have their jab. NHS teams are also visiting those who are housebound and cannot travel to a vaccination service.

All four UK nations England, Scotland, Wales and Northern Ireland will follow the approach recommended by the JCVI and begin expanding the age groups eligible for jabs over the course of the next few months.