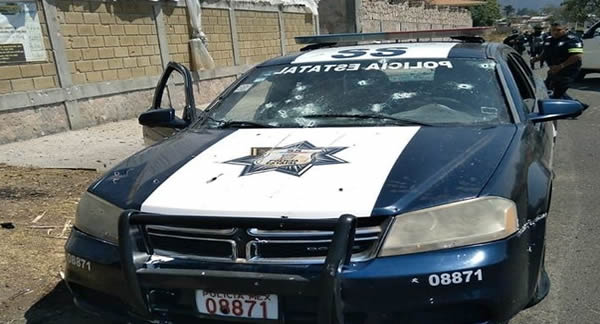 In two deadly ambushes, one in the municipality of Coatepec Harinas, 78 miles south-west of Mexico City in Mexico state, and another in Zacualpan, on Thursday afternoon, (March 18), eight Mexican State police officers, and five members of the state’s investigative police force have been killed by criminal groups as they travelled through the rural region, according to reports from local officials.

La Silla Rota, a Mexican news publication, said that one attack happened on the road to Zacualpan, where there was a confrontation between security personnel and members of organised crime.

Rodrigo Martínez-Celis, the security secretary of Mexico state, told reporters, “This is an affront to the Mexican state, and we will respond with total force, and with the backing of the law”, as the state’s attorney general’s office said the officers were travelling through the region ‘to combat criminal groups’.

Social media networks showed images of a white pickup truck pockmarked with bullet holes, and bloodied bodies of officers in uniforms and street clothes strewn alongside it.

Mexican news organisation, Animal Politico, in September 2020 obtained an intelligence report from the state government which identified 26 criminal organisations that are operating in the state, with the two main groups being the Jalisco New Generation Cartel, and La Familia Michoacana, both fighting over the same key territories.

The territory where the officers were ambushed is thought to be controlled by La Familia, who, according to the report, apparently run extortion rings in the territory, controlling the prices of everything from tortillas to building materials, and attacks on the police have become a routine occurrence.

Falko Ernst, the senior Mexico analyst at the International Crisis Group, said, “Police are often in a bind and either don’t comply with criminal demands and suffer the consequences, or they comply and get targeted by other groups at odds with those they’ve engaged with”, as reported by The Guardian.

Thank you for taking the time to read this news article “Mexican State Police Ambushes Leave 13 Dead In Attacks On Two Convoys”.