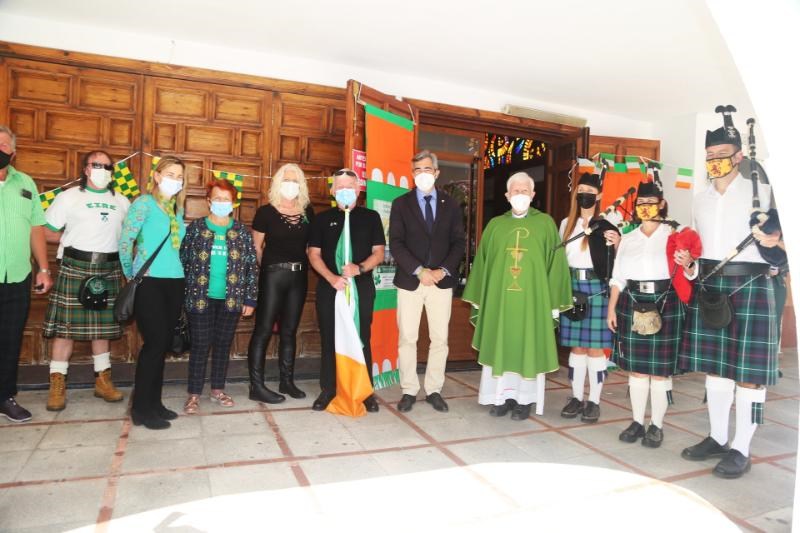 TRADITIONALLY, Benalmadena has been one of the main centres of celebration of St Patrick’s Day on the Costa del Sol every March 17.
Last year, everything that had been planned which included a procession and a cultural and musical event had to be cancelled at the last minute due to the spread of coronavirus and the inherent risks of infection which may be avoided by the use of face masks.
This year, Mayor of Benalmadena Victor Navas who is also Councillor for Foreign Residents, alongside Joanna Drozdowska of the Delegation of Foreign Resident and the president of the Irish Association, Terry Mckinley took part in a Mass in honour of Saint Patrick on March 17 at the Church of the Immaculate Conception in Arroyo de la Miel.
“In 1997, Tony Bell created the Irish Association of Spain in Benalmadena, and since then the Council has worked closely with the association to help the Irish, who have chosen Benalmadena as the municipality in which they want to live, work and educate their children”, commented the mayor as he underlined the importance of the contribution of the Irish community to the multicultural and cosmopolitan identity of Benalmadena.
“This year we wanted to celebrate this day in a different way, by the lighting in green of one of the most emblematic buildings in Benalmadena, the Castle of El Bil-Bil,” he added.


“We hope to return soon to the happy days and to the traditional and massive Saint Patrick Festival that Benalmadena hosts every year”, the mayor concluded.
Thank you for taking the time to read this news article “Special St Patrick’s Day Mass compensates in some way for lack of parade”.