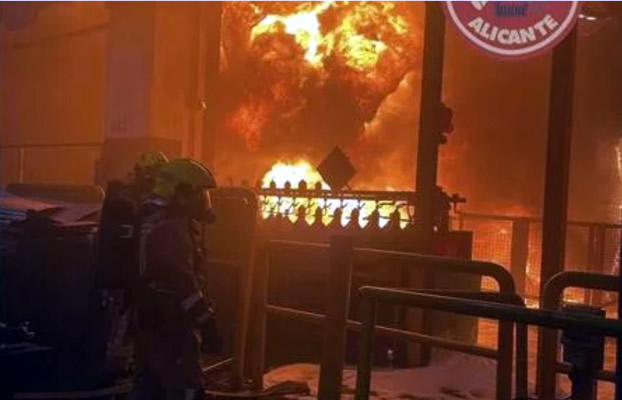 Seven full firefighting units from SPEIS – Alicante’s Fire Extinguishing and Rescue Service – were deployed in the early hours of Saturday 3, to tackle what they later called a “spectacular and complicated” blaze that broke out at the storage depot of the Aludium company, where tanks containing 40,000 litres of oil set on fire.
Luckily, there were no injuries, with the SPEIS crews being mobilised at 3.25am in the morning, arriving at the incident to find two huge oil storage tanks alight at the facility, and with flames shooting out of them to around 12 metres high into the night sky.
The crews split up into five teams and attacked the fire from above, with more than 35 firefighters in attendance, along with officers of the Alicante National and Local Police forces, who coordinated the emergency, and helped to evacuate and secure the industrial facility.
A statement later told of the difficulty in fighting this inferno due to the high thermal load and the danger posed by the tanks containing thousands of litres of burning oil, but the brave men fought the blaze – using a special foam compound designed for extinguishing chemical and volatile liquid fires – with the means of a hydraulic platform to enable them to fight the fire from above, and prevent the fire from spreading to the other storage tanks.
The fire was eventually brought under control at around 7.30am, and by 8.30am it was extinguished, but due to the thermal capacity of the containers, it was necessary to continue cooling the structures with water for many more hours through the day.

A full inspection had to be carried out of the roof structure, to avoid the possibility of any collapse, as well as inspecting the main structure of the facility.

José Ramón González, the Alicante Security Councilor praised everybody from SPEIS for their “effective extinction of the complicated fire this morning and the excellent operation organized with an intervention that has managed to control and extinguish the fire very quickly, avoiding further damage”.