Andalucia Expects To Receive 18.5 Million Tourists In 2021 After Summer Recovery 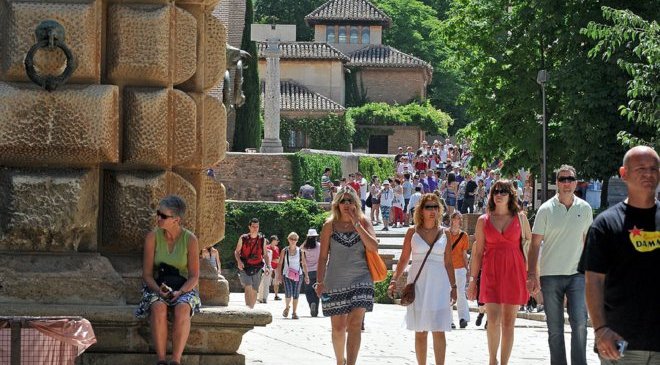 Andalucia Expects To Receive 18.5 Million Tourists In 2021 After Summer Recovery.
THE autonomous region of Andalucia in Spain said it expects to receive 18.5 million tourists in 2021, generating a turnover of between €14,000 and €15,000 million, which would represent an increase of 40 per cent compared to the disastrous 2020 when the virus was at its peak.
The Deputy Minister for Tourism, Regeneration, Justice and Administration, Alejandro Cardenete, pointed out on Monday, April, 20, that “in the United Kingdom they are practically vaccinated and are thinking about where to go in summer,” thus underlining that Andalucia is an optimal option because “it is a safe destination.”
The deputy councillor stressed that there is aid of €30 million ready to promote the tourism sector and predicts a recovery “throughout the second half” of 2021.
This was announced during the presentation ceremony, at the Sevilla City Council of the Group of World Heritage Cities of Spain (Gcphe) and the Paradores de Turismo before the return of mobility between regions in May.
Regarding the reactivation of tourism, Cardenete said: “Everything should not be limited to summer. This recovery can come during the second semester.” Not only for mature destinations, as is the case with World Heritage cities but for other places as well, which are being claimed by tourists.”
Changes in the tourism model
Speaking about future tourism Cardenete said he expects that visitors will have greater purchasing power due to not spending on holidays and that the objective is that tourism be “of high economic level, seasonally adjusted and without overcrowding.”
In 2019 the tourism sector contributed some €22.9 billion to the economy. “We do not have that amount to compensate for the drop in activity, but with the aid now available we will try to alleviate the effects of the crisis.”
The minister, referring to the €30 million rescue fund, added he will finish releasing the complete package of aid for travel agencies, campsites and rural tourism by April 21.
Source: okdiario